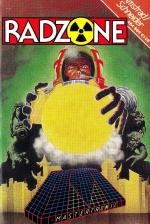 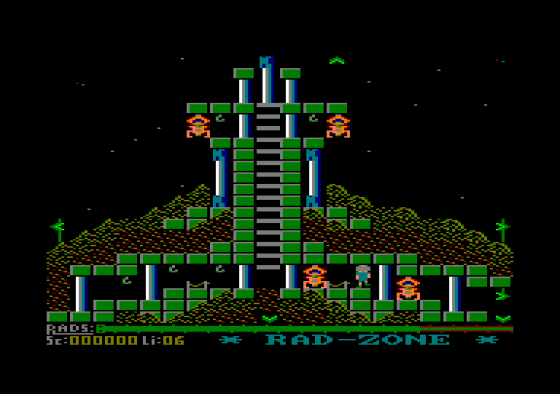 Radiation disasters are becoming commonplace it seems, although fortunately this one takes place on a remote planetoid. There's only one human life at risk and you've got one guess who - well someone's got to do it. You've got to clear up the mess: decontaminating affected areas by removing all the radioactive objects.

The game comes from the authors of The Scout Steps Out and has the same instinctive graphic style and gameplay. It's an exploration/platform game packed with plenty of small, colourful graphics and some nasty hazards. You control a little balding man who, after having donned an anti-radiation suit, has to venture out into the hostile irradiated environment.

The screens are composed of small, colourful, futuristic graphics including some moving dangers and other features that you have to find out about by trial and error. On each screen are a number of objects that need to be picked up in order to make it a radiation free area. These aren't always the same but include clam shells, seaweed, diamond shapes and discs. Some can only be neutralised when they flash red, making things even tougher! 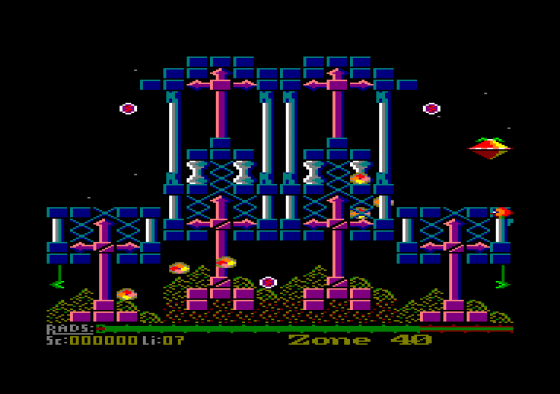 Once all radioactive objects are collected, the screen becomes a safe area. These areas are extremely useful for cleansing your suit of radiation. A gauge at the bottom of the screen shows this building up due to the presence of radioactive items and collisions with certain moving hazards. If it gets too high, you first lose the protective suit and then a life. Returning to a safe area removes all radiation, but if you've lost a suit then another one has to be collected from the start screen.

The moving obstacles on some screens are well designed and lethal if you get caught by one at the wrong time. There are rolling rocks, guards with spears, flying saucers and some knives that have a deadly sawing action. One section is particularly tough because it's underwater and has a buoyancy effect, the same as in The Scout Steps Out.

The screens require different skills to complete but good timing, fast reactions and a bit of luck will all be needed. They are mapped out so that they don't have to be tackled in a particular order but, because of the need to create safe areas, it's best to work on a regular pattern.

The game is very similar to The Scout Steps Out but it's £7 cheaper and that makes it much better value. The screens are attractive, well designed and tough enough to keep you exploring for some while. A delightful title tune plays on the start screen and for £2 you can have a lot of fun with this.

It's quite simple stuff, but I enjoyed the game a lot. The graphics are interesting and colourful, with challenging gameplay and good sound to boot. The safe areas will help you explore, and there's certainly plenty to see. A good game and a great price.

The screens are fine, but those colour-coded radioactive objects can be a real pain. It is possible to tell when they're red, but only just.

N. Very similar to The Scout Steps Out
N. Movement control, particularly when under attack, can be awkward.

The screens are attractive, well designed and tough enough to keep you exploring for some while. 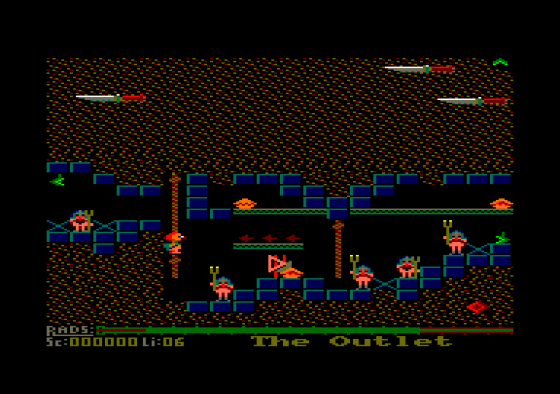