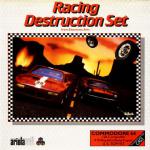 Racing Destruction Set has been described as the ultimate racing game. In this, I will try to see if it is. The 50 pre-built tracks and nine cars, along with track construction and variable game parameters and the features that originally drew me to it. The game has so many choices, it is almost unbelievable - each player must first choose a car, selecting engine, tyres, armour and weapons. Then the choice of track, either a pre-designed one, one you have saved, or one designed on the spot. After that, and you decide the parameters, number of players, quality of racing or destruction, difficulty and skill levels. This game is truly mammoth, so I will deal with it in sections, starting with the game itself.

Two people can play simultaneously on a split screen. The width of the track can vary between 1 and 3, and the surface can be either pavement or dirt. You control the car using left and right to switch lanes, forward to accelerate and backwards to brake. If you take corners slowly, the car will turn automatically.

The game has crossovers and turnoffs, giving access to loops and different ways. On destruction you have the ability to use your weapons, either land mines or oil slicks, so if you go down a one width part followed by your opponent, drop the mine and it will be the end of him. There are jumps which are ramps and can really make you fly showing your shadow below.

You can race against a human opponent or the computer, and control is via joystick. On loading the game, you can play on the demo course with two unarmed courses which give you the feel of the cars and how they react on different surfaces.

The tracks are divided into four sections. The Grand Prix circuits are all pavement and have no jumps. These are just like the ones in other racing games and are for the speed fanatic, though the idea of dropping a land mine during the British Grand Prix is rather appealing. The circuits are Buenas Aries, Tyalamis in South Africa, Longbeach in California, Jarama, near Madrid, Zolder in Belgium, the infamous Monte Carlo, Dijou in France, Silverstone, Hockenhelm in Germany, Osterreiching in Austria, Zandvoort in Holland, Monza in Italy, Estail in Portugal, Masport in Canada and Watkinded, Dallas, Las Vegas, Detroit and Meadowlands, all in America.

Next we have the American road-race circuits when the American NASCAR races are held. Stock-cars are especially good fun on these, where speed and roughness are the essence. All are in America, they are: Willowsprings, Daytona, Riverside, Seaspoints, Road America, Midotino, Road Attenta, Banent, Charlotte, Lagunaseca (where the famous corkscrew is - so beware!), Limerock Park and Cleveland. Next we have the three most famous test circuits in the world which are best for high speed duels, where speed and good driving will prevail in a nine-lap race. The courses are Floaran, the track constructed by Enzo Ferrari to test his cars, Weissach, Porche's test track and a custom-built vehicle may be tried out here for performance before the race, and finally Indy, the one on which the oval in Pole Position II is modelled.

Last, but by no means least are the masochist tracks, where the size, height, amount of jumps, width and surface change. The courses are: Demo, something out of everything; Dirt 8, a figure of 8; Big E, which has lots of jumps; Snake, with loads of jumps with different surfaces; Clover, a clover-leaf shape - great fun; Spiral, with lots of long and sharp jumps, while Jumps has a big one; Headon, with so many ways of hitting your opponent; Roundabout, which gives you the options of which way to go, though they are all the same length; Whichway is similar, except some ways are short; Destruct is very small and very lethal; Tiger has fifteen crossovers and a loop; Variety has everything; the Supernos has two impossible corners; Dragrace is built for the Indy drag cars; and Killer is impossible!

The cars are can-an, Indy drag racer, baja bug, pick-up jeep, dirt bike, steel bike, stock car and lunar rover. Each of these has a choice, whether it's just one thing or everything. You can change your tyres, engine size, landmines (max. four) or oil (max. nine gallons), armour (max. 7) or crusher (max. 9). This is all very nice, but after a while I found I was using a stock car 6600cc engine, four land mines, seven armour and nine crusher, nearly all the time, though the con-ans spped and a bike lightness were useful in some races. My favourite race of all was nine laps in the very slow lunar rover. I defy anyone to keep a straight face through it. The advantage of the cars is the ability to handicap the better driver, giving a fair race; something none of the other two player games do, and it also pits the speed and dexterity of an unarmed car against the brute force and ignorance of my stock car. The choice in this is really unbelievable.

The track construction option can be used when you run out of tracks (in about 2034 at the present rate!) though I have attempted it. It takes a lot of time to construct and a lot of practice to find out how to use it at its best.

You can change the road width, road surface and height and have crossover turns, and even alter the starting direction. It's a lot of work, it took me three goes to design a track, which I found was impossible to complete. I saved it and play it regularly, and still haven't completed a lap. This really makes this program infinite. You just can't run out of things to do.

You can change the number of laps, the difficulty level and the skill of your opponent, as well as the background (a choice of four) and even the gravity - from moon to earth to Jupiter, a choice of fourteen levels in all. This is the fun bit, with light bike on moon gravity at top speed over a jump: the question, will it ever come down and if so, where? Here, you also choose whether you want racing or destruction (go for destruction any day!).

The game is marred by the long loading system but the choices, especially the tracks compensate for this. This is no ordinary racing game, it is no ordinary game, it belongs in a category all of its own, and is the third game to enter my list of all time greats (the other two being Elite and The Hobbit). This is easily the best racing game ever so far. There are so many choices that have to be made and so many files to be loaded, it may well be 20 minutes to half an hour before you start the race. If you can stand the wait, then this is the game for you, racing fanatic or not. If I could have only one game, this would be it!

This is easily the best racing game ever so far.