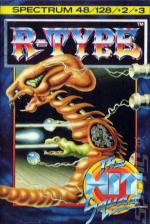 This month's biggest barg of the lot just has to be R-Type. And blimey what a corker of a shoot-'em-up it is too. In fact I'd even go so far as to say (if I may) "The best blaster ever".

Life begins as a puny spaceship with a crap and rather titchy laser (a case of the longer you keep your finger on Fire the bigger it gets) scrolling left to right through loads of colourful caverns. A bit of blasting icon collecting later though and there'll be plenty of opportunities to add on (in this case, literally) the odd laser, gun. missile or two. As for the baddies? Tsk - hundreds of the things. Walking ones, flying ones, ones which just sit there and get in the way and lots of whopping great end-of-level nasties to boot. One of the later levels in the game consists entirely of this huge spaceship which you have to fly along and blow up a bit at a time.

Phew. And this really is brilliant stuff (multiload, of course, but we'll let it off just this once). Amazing graphics (with no clash), unbelievably addictive, extremely playable, eight varied levels, a classic of its kind, etc etc etc. And at a mere £2.99? Words fail me. Er, um... As I said. Words fail me.