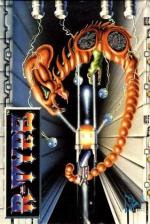 Way off in the far reaches of space, beyond the limits of the Imperial Realm, the mysterious planet of Bydo is preparing for war. Large battle cruisers are being constructed, bio-mechanically engineered beings are being created as killing machines and strange guardians are armed to defend the planet from return attacks. Earth is preparing to make sure that nothing becomes of any Bydonian invasion plans. They have created the R-Type fighter.

The fighter is currently in its 9th generation, and operating models are few in number. The only chance that Mankind has is to penetrate the Bydonian defences with a single shielded R-9 fighter, so as not to create too much attention.

The R-9 is fitted with a holo-cell armament system, which means that a crystal is fitted to the control system, different combinations of which cause various weapon systems to be projected in front or behind the fighter.

The planet Bydo is split into various zones, exited by destroying a large guardian at the end. To vanquish the Bydonians, all the guardians must be destroyed, causing chaos on the planet.

R-Type certainly isn't as bad as I expected it to be (That sounds a bit off, doesn't it?), the scrolling's smooth and the backgrounds fade in and out nicely, for a start. As far as accuracy goes, it does lose a little in translation and some of the features are missing, but on the whole the programmers haven't disgraced themselves and have come up with a decent scrolling shoot-'em-up.

The only thing that really bugs me is the awful loading system. Even when you die on level one you have to rewind the tape and load it in again. Aaargh! Dedicated disc drive owning R-Type fans should look out for it, but tape owners should be more wary.

Well, after all the fuss about the similarities between R-Type and a "certain other" shoot-'em-up game (Katakis), the original has finally arrived. Unfortunately, it's not as good as the "certain other" game (you know what I'm talking about!), particularly the naff loading system, which is particularly annoying seeing as there's no continue play option!

On the whole R-Type is not too bad, the graphics are OK and it's quite an interesting blast in its own right, but it doesn't capture all the atmosphere of the arcade original. It's probably because the weapons seem a bit weedy compared to the coin-op; the whole thing just lacks that little spark to make it really good.

Presentation 55%
Nice control method which is let down by the disastrous multi-load and lack of options.

Graphics 78%
Smooth scrolling and decent sprites, but weak in the large aliens department.

Sound 52%
Annoying tune (which can't be turned off!) and crass spot effects.

Hookability 80%
You want to play at first, just because it's R-Type.

Lastability 70%
Re-loading the levels becomes annoying after a whole, particularly when they're so unrewarding.

Smooth scrolling and decent sprites, but weak in the large aliens department.