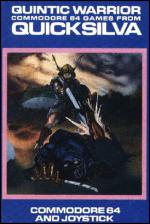 No, this game isn't an adventure, as the name may suggest; it is in fact an arcade style game.

You are a small space craft (or possibly a warrior?) The object of the game is to shoot at rows of your enemy as they move slowly up the screen.

Along the screen edges are three laser cannons, which continuously fire missiles horizontally and vertically.

If you are caught at the point where the missiles cross over, then you lose a life.

The graphics and screen layout are rather limited - the author obviously didn't use much imagination to create the shapes. The sounds are acceptable but again they are nothing stunning.

The documentation is virtually non-existent. On running the program, I was shown a few pages of instructions which I had forgotten by the time the game was loaded.

The game didn't appeal to me - I soon got bored with it! - but perhaps a young child might find it quite a challenge. It isn't really fast enough for anyone over 10.

The game didn't appeal to me - I soon got bored with it! It isn't really fast enough for anyone over 10.