Published in Your Sinclair #6 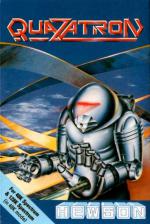 You might as well ignore the fact that this game is supposed to be the Spectrum version of a C64 game called Paradroid. I mean, it's a whole different ballgame. Er, that's just a figure of speech, it's not a ball game...

The plot, for those of you wise enough not to have played the C64 version, revolves around a certain little droid called KLP-2, aka Klepto, assigned to deactivate the armies of hostile alien droids that inhabit the underground city of Quazatron.

Klepto disables the droids either by blasting them to their component atoms (crude but effective), pushing them off thew programmed routes, ramming them if he's strong enough, or by 'grappling'. This is a process by which you take over the grappled droid's mind at circuit level, switching gates in his circuits until he relinquishes control.

It's totally brilliant! By far the most original scenario to pass before my eyes, and certainly the greatest all-round challenge. Don't get me wrong, I like games that involve blasting things to bits, but as well as the thrill of destruction I like a bit at strategy thrown in. Partly to justify my interest in wanton havoc, but also because it's nice to play a game that stretches more than your joystick. I like to be stretched all over... but then I'm a bit pervy.

It's totally brilliant! By far the most original scenario to pass before my eyes, and certainly the greatest all-round challenge.