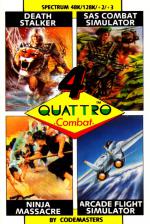 At that sort of price you can't go wrong really. All the packs are themed, but that doesn't mean there's a lack of variety - because there's plenty of different game styles to contend with (you would not believe it, etc, etc).

Quattro Combat features Death Stalker, an okay-ish platform game, SAS Combat Sim, a beat-and-blow-em-up, Ninja Massacre, a bit like Gauntlet with ninjas, and Arcade Flight Sim is what it sounds like, viewed from overhead. Overall 66%

Quattro Super Hits gives four action-packed games, including Super Stuntman, an entertaining driving game viewed from above. Super Tank gives you a tank to blast through jungle with, Super Hero is a 3D isometric arcade adventure and KGB Super Spy has you flying around scenery picking up lost scientists! Overall 79%.

Quattro Sports is probably one of the best packs on offer with Grand Prix Sim, a well playable overhead Super Sprint effort, Pro Ski Sim, an addictive ski game, Pro Snooker Sim is one of the best snooker sims around and BMX Sim you're already played 'coz it's on the Codemasters tape this issue! Hurrah! Overall 86%.