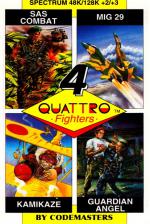 Bouncing around the world with a cheerful smile may well be the stuff of Codemasters legend, as borne out by that chart busting eggy fellow, Dizzy, but believe me, there's no substitute for a good blast 'em up. It gets the adrenalin flowing and works up a 'moowst bagelicious' appetite. Quattro Fighters could be the solution!

Of the four games available on Quattro Fighters, two are flying shoot em ups, Soviet fighter MiG 29 and Kamikaze. MiG 29 is a fast, forward looking flight sim game with excellent graphics and well above average gameplay. There are five different combat scenarios and the game, unsurprisingly involves destroying aerial and land based targets including American Fl5s, tanks and helicopter gunships. Skill and judgement are called for as you avoid flak, missiles and serious gunfire. It'll take a little while to get used to the various weapons and their selection but the game is all action the whole way through.

Kamikaze is less impressive and belongs to the Harrier Attack school of computer game. Scramble off the ground and attack the enemy's HQ with a dinky little aircraft that appears to fire peas at the old Bosche. The enemy will throw planes, paratroopers, helicopters, anti-aircraft guns and even UFO's at you. Yes, it seems as though the whole galaxy is against the kamikaze pilot. The graphics are colourful though basic but the game remains fun, if a little infuriating, to play.

The best of the two ground action games is without doubt Guardian Angel. A thumping good beat 'em up that's sometimes a little overdone in the difficulty stakes. In Guardian Angel you must low kick, high kick, thump and jump your way past the thugs of New York to make the city safe to live in (some hope!). Sometimes you're up against just one or two easy enemies but very often you'll end up fighting off many more, all at once, including some very tough dudes. Watch out for and avoid at all costs the bad guy with the fork lift truck, if he hits you you'll automatically loose a life, and the vicious rats of doom must be wiped out with punishing, long distance, low kicks. The action is fast and the graphics are quite clear. Unfortunately it can be a little difficult to control your sprite but this game is worth a look.

SAS Combat Simulator is very similar in concept to Airborne Ranger (reviewed last month as part of US Gold's Super Sim Pack) and although I personally don't like this type of game, it's still an average shoot 'em up with lots of weapon power-ups and a multitude of potential targets. The battlefield is vertically viewed and colourful although it sometimes gets a little difficult to distinguish between the various sprites on screen.

Quattro Fighters may not be an outstanding collection of big licences but there is lots of playability and lastability there. I would find it difficult to get enthusiastic about some of these games by themselves but they do put up a darn good fight as a collection!

Furious action from Codemasters as they put the eggs back in the fridge and concentrate on some firepower for the new year. Give me a gun, give me a plane, give me this game.

Furious action from Codemasters as they put the eggs back in the fridge and concentrate on some firepower for the new year. Give me a gun, give me a plane, give me this game.
Logout