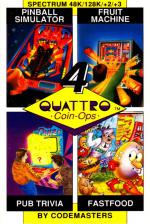 Feel like a bit of gambling eh? Well this is the game for you in that case. If like our Garthy you're a bit of a big spender down the local arcade, but unlike him, you expect big returns for your time and money then this package may only be of passing interest - unless you really are the king of lounge lizards.

The four titles in this package are varied, with one common denominator - Pub games! Yes, all of the games can be found in most pubs and sleazy arcades from Leighton Buzzard to Las Vegas. We had differing opinions on the games however. Garth and I became addicted to the Fruit Machine, Andrea to the Pinball game and Jerry Hall our Ad Man, to the Pub Trivia quiz. The one game that seemed to not follow this tested formula was Fast Food - an unfortunate PacMan clone which held no interest for anyone.

Graphics and gameplay on the titles are rather variable. Fast Food, involves wandering around a maze collecting various high cholesterol foodstuffs has the least exciting gameplay and graphics but conversely Pub trivia and Fruit Machine are well drawn with realistic animation.

Pinball is a mixed bag. Any pinball game can get at least a little addictive and this is no exception even if it is far less than spectacular.

The biggest problem lies with Pub Trivia and Fruit Machine, they are both realistic and thus it is very disappointing when you win loadsa money but don't get any of it to turn into drinking vouchers at the end of the evening.

All in all though, if you can live with the idea of not winning any money for your efforts, then this really is the compilation for you. If you're the undisputed king of the (Pub) Lounge Lizards.

Lots of gambling mayhem and not-to-difficult quiz related japes with some Pinball and a Pacman clone thrown in for good measure. Jolly, jolly and jolly again.

Lots of gambling mayhem and not-to-difficult quiz related japes with some Pinball and a Pacman clone thrown in for good measure. Jolly, jolly and jolly again.
Logout