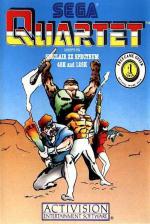 Oh dear, oh dear, oh dear. That's about all I feel like saying about this offering from Activision. How to take a good coin-op and ruin it would be a good summing up of this conversion of Sega's multi-player arcade game.

No-one will be rushing to play the Spectrum version of the game. The best thing I can say is that I hope the C64 and Amstrad versions are better.

Quartet was Sega's bid to catch up with Atari in the multi-player game stakes which began with Gauntlet.

Of course, you can't hope to get four players gathered round a Spectrum - but you can get two. Even with a friend playing along with you, it's hard to capture any of the excitement generated by the arcade machine.

Your Quarter team member is tiny, just one colour character, but fairly well animated to give it its due. The backgrounds are multi-coloured but boring, and the nasties are often hard to pick out against them.

It's also pretty easy to defeat the enemies and collect the keys which take you through the exit doors and on to further levels in the game. I got up to level eight in the first sitting.

The only reason I got no further was that I found myself stuck behind a series of awkward barriers after picking up a jet-pack.

The jet-pack stops you being able to crawl - so there I stayed until time run-out. I almost didn't go back for another crack at the game.

It's also difficult to tell just what the objects which you collect actually do for you - apart from the "shield" which makes you flash a bit to indicate that you are invulnerable for a while.

It doesn't seem to make much difference which character you chose to play. Edgar, Mary, Lee and Joe seem to have identical powers and look the same on screen as well.

And the price! £10? No way Jose. These days I reckon Mastertronic would think twice about putting a game of this quality out at budget prices.

To be fair, we haven't seen the C64 or Amstrad versions. If they are any better, we'll let you know.

Such a shame, after the excellent Enduro Racer we were expecting great things.