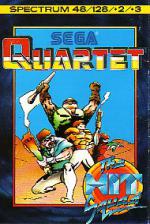 Here's one that maybe should have stayed in bed this morning as well. It's got 99 levels (but don't hold your breath), twoplayer action, things to shoot, things to collect and really crap graphics. And that just about sums it up.

What you've got to do is choose a character from the four available, allow your chum to do the same and then go through each level finding and killing the jumbo-baddy and picking up the key that will enable you to move onto the next level. Meanwhile, loads of monsters come pouring out at you just asking to be shot. To help you there's an add-on backpack which lets you fly around a bit (normally it's just Left, Right and Jump) and various weapons and things if you can find them.

Co-operation's the name of the game here. For example, when you get to the end of each level it's a good idea to take on the big guardian guy while your mate fends off any marauding assailants that try to stop him (or vice versa). A good idea that is if you actually choose to buy and play thus game And here's why you shouldn't...

The graphics really are eye-wateringly grim. There are huge tidal waves of colour which tend to engulf everything, with wan sprites making it really hard to see what's going on. Luckily though not much does happen. After ten or so levels you realise that things obviously aren't going to improve. It's just level after level of exactly the same migrane-inducing horribleness.

Oh look - there's a dust-lorry driving past under the window. (Clunk.) Bullseye!

It's just level after level of exactly the same migrane-inducing horribleness. After ten or so levels you realise that things obviously aren't going to improve.