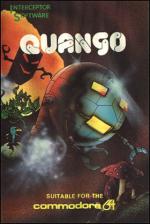 Interceptor's games never seem to go far beyond the maze/search/destroy equation but they're finding plenty of new twists on the theme. In this one, you control a robot who tends an underground mushroom farm on eight levels (this is one ambitious tin man!).

The nasties are rival robots (who probably can't afford their own greenhouse), weeds that would pose a problem on Gardeners' Question Time, falling boulders and the like. All your trusty invention has to do is pick up the mushrooms on each level, revealed as a labyrinth on a four-way scrolling screen. He has a limited amount of bombs which have a habit of blowing him off his own castors.

It's a hard game that gets harder - the bottom four caverns are liable to flood, on top of everything else. Because the maze is so damn sharp on the corners, it's tough to beat hazards which move so quickly. A stick with precision response is mandatory to get anywhere with the game, which is well-executed but a bit lacking in character. The Quango? It's this bird which hatches out when you get too near one of its eggs... well, I did tell you it was hard.

Because the maze is so damn sharp on the corners, it's tough to beat hazards which move so quickly.