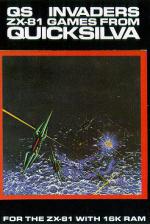 This is a straightforward Space Invaders game for the ZX81, which can be used with or without the QS sound board and Characters board.

It loads with no trouble and the instructions are clear and simple to follow.

Although there are long pauses in between each set, and at the end of each game, the controls work smoothly and efficiently. Sometimes too much so - the Base shoots from side to side so quickly that you need quite a delicate touch to stop it in the right place!

The bombs only fall from directly above the Base, and again they can move so fast as to be difficult to avoid. But that is all for the best, as this game, unlike arcade Space Invaders, does not have many variations.

There are three levels of play, ranging from a slow game scoring 10 points per invaders to a fast one which scores 30 points per hit. A randomly generated 'saucer' also passes across the top of the screen for you to shoot down.

Provision has been made for functions such as scores per hit and bomb rate to be altered, and the highest scorer can enter his name at the end of a game.

Allows scores per hit and bomb rate to be altered, and the highest scorer can enter his name at the end of a game.