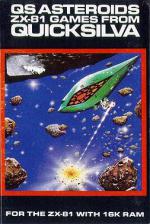 A surprisingly realistic game, considering the limitations of the ZX81's character set. It follows the standard arcade format, with wraparound screen, bonus chips and on-screen scoring.

Controls, too, are of the standard arcade type and can be operated simultaneously - very useful for spinning and firing at the' same time.

The only drawback is the use of numbers to represent the eight possible directions the ship can point in, but those of you with programmable character boards will be able to substitute characters of your own in their place.

A well-produced cassette insert contains easy-to-follow, nononsense operating and loading instructions. Also included is a card listing useful variables such as number of ships and score for bonus ships.

Provision to control the game via switches connected to two eight-bit ports has been included in the program. The manufacturers will send details if you send them an SAE.