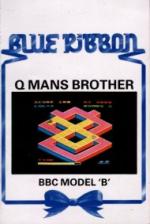 As the title would suggest, this is a variation on Blue Ribbon's favourite Q-Man theme - the company's Screwball game is based on the same principle.

Instead of a pyramid, you have a simplified version of the 3D Munchy grid to move around. As you move, squares change colour, and in this version you have a time limit. When all the squares are changed, you move onto the next screen.

The opposition is not so imaginative - there's something else which not only chases you but changes any squares you've already altered back to their original colour, which is downright unfriendly of it.

If you've played Screwball and Q-Man, there's not much here to hold your interest, and I found it considerably easier to play than the other two.

If you've played Screwball and Q-Man, there's not much here to hold your interest.