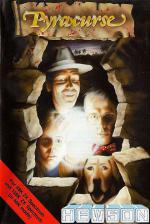 Something was trudging towards them with slow, heavy, yet regular steps. Suddenly a figure lurched from behind a crumbling pillar.

The character design, animation and plot of Pyracurse combine to produce a deft parody of those old movies and, incidentally, one hell of a game.

That dodgy term, adventure movie for once seems well warranted.

To say that you actually identify with the animated characters in Pyracurse may be pushing it a bit, but certainly they give as good an impression of actually having a personality as any I've seen.

You control four characters (three characters and a dog to be precise) - Daphne, the Professor, O'Donnel and Frozbie. Each has different strengths all of which you will need at one time or another. Frozbie, for example, may find things hidden in the dirt.

Movement of each character around the labyrinthine maze of the ancient city is by joystick. To move onwards through the city you not only dodge hoards of headless monsters, skulls, scorpions and other wandering nasties but also open hidden doors, collect treasures and solve countless puzzles.

The trick to avoiding trouble is to select the right character to control in the right place at the right time.

There are essentially two modes. In the first you use the joystick to move the currently selected character around the Inca-style city the walls of which scroll smoothly in a similar way to Ant Attack. The second mode gives you a menu, scrolled using the joystick (a la Dragontorc) where you select an object for use, switch control between characters or choose to control all the characters simultaneously.

Everything is not as it seems. The thing to do is to concentrate on getting through the maze of city ruins collecting information and objects as you go. It seems, though that various members of your group all have different motives for wanting to be on the expedition...

Pyracurse, the first game from Hewson's in-house programming team is a winner. The smooth scrolling and 3D graphics put it a disembodied head and shoulders above most other recent releases.

"My God professor it's incredible!" gasped O'Donnell, "It seems Hewson can do no wrong"

"My God, Professor it's incredible!" gasped O'Donnell. "It seems Hewson can do no wrong!"