Published in Your Sinclair #44 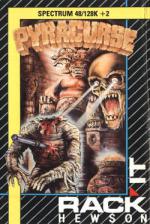 A real rarity, this - a completely crap Hewson game. Titter ye not, for I speak the truth.

It first appeared back in '86, in the middle of the 3D isometric war that waged back then, when everyone saw how many sales Knight Lore had notched up and wanted a piece of the action.

Deep in the forests of South America, three explorers and a dog are exploring an ancient Sinu temple, which essentially involves being chased around by headless corpses (who nevertheless seem to have an accurate homing system), skulls, oversized insects and the usual nasties. You can toggle between all of your four characters, which is a help as they tend to get killed quite quickly. Sounds a bit like Where Time Stood Still, doesn't it? And indeed there are similarities, but this game has none of the later title's subtlety, scope or sheer playability.

Pyracurse is altogether too fiddly to be much fun - an hour spent trying to get to grips with it proved a frustrating experience. In the end, in fact. I loaded up Where Time Stool Still, just to check that it was as good as I remembered it. It was. This isn't.

Time certainly hasn't stood still since this was first released. And to think it originally got a Crash Smash...!

Pyracurse is altogether too fiddly to be much fun - an hour spent trying to get to grips with it proved a frustrating experience.