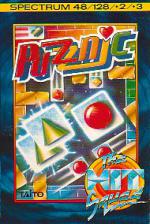 After Tetris made it big a couple of years back, the arcades were briefly over-run by abstract puzzle games attempting to capitalise on its success. Although many of them were simply slight rewrites of Tetris, there was the occasional gem to be found too, and Puzznic was one of those. The idea's a simple enough one - you're presented with a screen containing a number of blocks with various symbols on them. If, by moving the blocks around (in accordance with the laws of gravity), you can bring two (or more) blocks of the same pattern together, they disappear. If you can completely clear a screen of blocks, you move onto the next screen. And that's it. The only thing approaching a complicated rule is that sometimes a screen will have an odd number of one (or more) type of block, meaning that you have to make three blocks touch simultaneously if you're not to be left with a 'widow' which will make the screen impossible to complete.

Of course, the fact that the rules aren't complicated doesn't mean that some of the screens aren't. In fact, some of the later levels in Puzznic will tax your powers of perception and planning more than just about anything else you've ever seen on a Speccy. The only thing that taxes your lateral thinking capabilities anything like as much as this, in fact, is probably Lemmings.

Puzznic is quite slow-moving stuff but the time limit, and the fact that a single mistake can be enough to make many of the levels completely unfinishable, lends it a sense of urgency and addictiveness that you might not expect from it. While it misses the bright primary colours of the arcade (or other computer) versions, the graphics are still clear enough for you to see what's going on, and even if you can't (like if you've got some ultra-black shades on or something), you can switch the display at any time so that the different kinds of blocks are represented by numbers instead of geometric shapes. The whole thing is very user-friendly, but if you fancy yourself as a bit of a puzzle-game champ, this could just be the thing to take you down a peg or two.

A very user-friendly puzzle game... If you fancy yourself as a champ, this could just be the thing to take you down a peg or two.