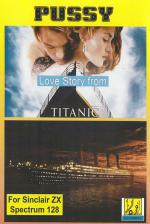 One of the many things we all learned from recent retro-gaming documentary From Bedrooms To Billions was that merchandising sells games. Write a game called Jungle Safari and you'll get 10% of the sales it would garner with the title Predator and Arnold Schwarzenegger on the cover art. Fact. Another fact: Merchandising is a double-edged sword. A brilliant game can suffer poor sales on the back of a lousy movie.

Yet never have I seen merchandising as downright weird as this month's final release. I'm about to describe a great game for the Spectrum 128K - a splendid platform-based puzzler with music, graphics and presentation that is of such high quality that, were it not for its merchandising, it could take pride of place in that collection of rare new Spectrum games you've been building. That game is called... (Drum roll please) Pussy: Love Story From Titanic.

Yes, you read that right. This game is called Pussy, with all of the connotations of that word implied by its position in the title. That has probably put off over half of its potential audience right away, leaving behind only the bewildered and the fans of Sex Olympics/Rapelay. The latter are also going to be disappointed as the game includes no pussy at all.

I therefore award Pussy a completely fictional award of "Stupidest Title Ever for a Puzzle Game" and, amazingly, it gets even worse. According to the overview, you play Leo and, in each stage, you need to rescue Kate who is entombed in a grid of blocks - yes, blocks! - that you must smash out of the way. The background shows a nice rugged mountainous terrain.

There's no seafaring, or anything water-related in this game at all! Indeed, without the inlay overview - or the badly digitised stills from the movie Titanic punctuating the action - you'd have quite simply a puzzle game. A great puzzle game, but not one illogically disconnected with a barking mad title plus an invented back story.

Sealing the puzzling deal is the boxart - where the official promotional artwork for the Leonardo DiCaprio/Kate Winslet movie Titanic is overlaid with "PUSSY" splashed across in place of the actual title. Yes, really, I'm not making this up. The whole appearance of the software looks like something you'd be offered out of a briefcase by a suspicious-looking Chinese guy outside your local Tesco!

What's so infuriating is that the game is fiendishly good. It requires swift reflexes and a great deal of thought to position Leo in the exact place he needs to bash out the blocks that solve each puzzle and allow Kate to safely drop into his arms. Even by stage four, the puzzles presented have only one simple - and not immediately obvious! - solution. The control of Leo is fluid and all the little touches make it a joy to play. Some of these touches are bouncing passwords, bonus razzmatazz and music so good that it's hard to believe it comes from a Speccy!

So, if Fun Forge stripped out the totally irrelevant Titanic cutscenes (which also weigh in at about an hour's loading time on cassette!) and changed that ridiculous title, I'd be roundly congratulating them on one of the best Spectrum games ever made. Instead though, I'm just royally confused by why it's coupled with this bizarre merchandising. I suspect Director James Cameron had zero hand in the game and so I just don't see the point.

My recommendation: By all means invest in the physical package and relegate it immediately to "that drawer" in your bedroom. But play it only via emulation, enable all tape load speedup hacks and hit space to skip every pointless cutscene. To Fun Forge I say this: Keep demos separate from games in future. To whoever thought of that title, I say simply grow up.