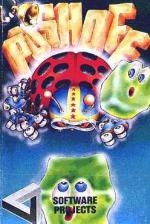 It's a hard life being a ladybird, at least that's what the inlay card tells me.

Continually being chased around the garden, her only means of defence is to surround herself with a barrier of bricks. Now there'a novelty for you - a brick-laying ladybird. But then anything, or nearly anything, is possible on a Spectrum. All you need is imagination, and the right kind of program to stimulate that imagination.

But, of course, that stimulation has to be maintained throughout the game, otherwise interest in the game soon flags. Bertha, the ladybird, is quite easily controlled around the screen, and I found the movement very smooth.

Unfortunately, I personally couldn't maintain enough interest to play for more than half an hour at a time. I tried the game a total of five times, and could find no bugs or loading problems.

I tried the game a total of five times, and could find no bugs or loading problems.