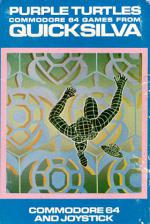 This game from Quicksilva is very unusual, and seems to be aimed at the younger micro user, although it is quite addictive to play. You could describe it as a 'cute' video game.

The object of play is to gather up fruit which falls from a tree on the opposite side of the riverbank.

To cross the river, your man must leap onto the backs of turtles which float on the surface - but watch out, because the turtles may suddenly sink without warning, leaving you to a watery grave.

Each screen consists of a number of each type of fruit which must be cleared within a time limit. As the game goes on, the turtles sink more rapidly and sometimes all four sink at once.

The graphics in this game are superb, with clouds and balloons floating on the skyline, and a strange cackling vulture which sits on a tree on the riverbank.

Sound is also well used - a jaunty rendition of 'Messing About On The River' heralds the start of each game.

As I said, the game might suit younger children best; otherwise, after a few hours playing the game, it could become slightly tedious.

This might suit younger children best; otherwise, after a few hours playing the game, it could become slightly tedious.