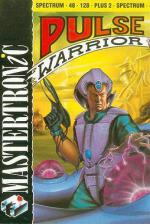 No. this game hasn't anything to do with peas and lentils: it's all about energy pulses. A hostile alien race from Cirrus Major has decided to attack the Earth (crikey, why do all aliens hate our little old planet so much?). Their first targets are the Earth's massive orbiting solar power stations which are completely defenceless.

Naturally this is where you come in, with a hastily-made spaceship that lacks nothing except a weapon. So the only way to eliminate the invading aliens is to exploit the energy pulses generated by the power stations themselves. By using your ship to deflect the pulses into lenses, the pulses can be magnified so that they can destroy the aliens. This task must be achieved in each of the station's 36 sectors, which are all divided into three zones. Each zone has its own colour and, more importantly, time limit for completion.

The idea of bouncing pulses (shown as little lines) around the colourful screens is original, but doesn't quite come off. Severe frustration is caused when, after building up a large pulse, it's too easily lost through one of the exits. What action there is moves at a snail's pace and completely lacks any strategic element to get you thinking. Still, at least there's been attempt at originality and the graphics aren't that bad. If you can take the laborious pace it might be worth investigating at the budget price.

'In the long history of computer gaming, saving the Earth has never seemed boring than in this game. In 128K mode, sound is represented by simplistic effects and an atrocious in-game tune. Graphically Pulse Warrior is okay, the monochromatic sprites move around the coloured backdrops well enough, but in the playability stakes, yes folks it's 'zzzz' time again. Maybe you can something more to this game than wandering aimlessly around, deflecting rays and avoiding baddies, but I certainly couldn't.'

It's laborious, but at least there's been attempt at originality... and the graphics aren't that bad.