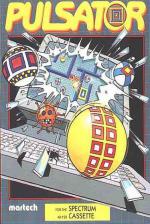 Pulsator is more than the sum of its parts. Partwise it's definitely budget stuff. Sumwise it's a very well designed game, better than the average budget, but maybe disappointing if you're expecting ultra-slick graphics.

It would have made an absolutely splendid mega-budget game. As it is - well - you'll love it if you're into puzzles.

The idea is simple. There are five mazes, created out of simple arrangements of walls. You control a blob and you're looking to escape from each maze having 'rescued' either Boris, Arfur, Nigel, Fred or George (also blobs).

To get out you need to blast a bit and collect oil cans to keep energy levels up and just travel through. Mostly, though, you have to reason your way past several logical puzzles.

The crux of Pulsator's five levels are the numbered gates.

They block off several parts of the maze. Each gate is switched on or off by a series of toggle switches of the same number scattered around the maze. This means that to get through some sections of the maze you must have passed through a toggle. Suppose, for example, you're trying to get past Gate 5. If you choose a route with two toggles on it, passing through the first opens the gate, but passing through the second close it again. It can get very complicated.

Other features of the game include roving blob baddies which are variously easy to kill or absolutely impossible. At least one section on each level presents you with a straight option of dying but clearing an obstacle (a particularly potent blob) or going the difficult route where you may either lose no lives at all or, more likely, loose very many lives indeed - in Level 1 it's a twisting a turning electrified wall.

Other stuff - transporters, a one-way section which only allows you to pass in one direction and energy draining baddies which wear you out. If you don't make a map you'll be lost.

The game is definitely pretty compulsive but even on later levels the graphics do remain rather simple - the colours change a bit though and, for what its worth, the mazes get even harder. Incidentally, the 128K version has extra sound.

I think the average Rambo or Short Circuit or Head Over Heels fan isn't going to think much of this one.

If you're into puzzles you may feel differently - it's a real challenge.

Personally, I think its a bit expensive and would have wished it had been £2.99 or so where it might have got a Classic.

Plain to look at but ingenious to play. it's a maze game which tests planning and reasoning more than blasting skills.

Plain to look at but ingenious to play. It's a maze game which tests planning and reasoning more than blasting skills.