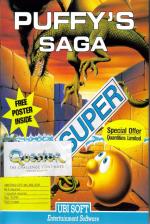 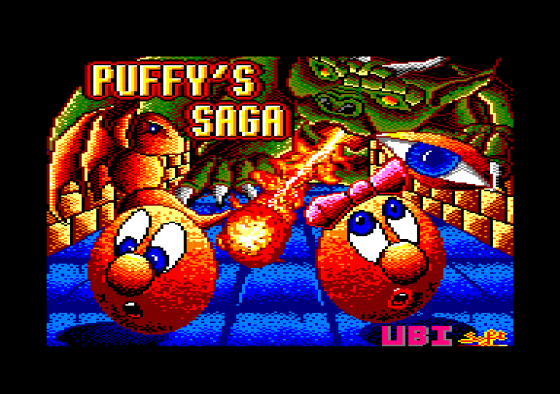 Poor old Puffy! There he was, taking his girlfriend "up the woods" [Oh yeah, say no more - Ed], when he made a wrong turning somewhere. Now the pair of them are trapped in a strange alien maze-world.

The only way out is, for some inexplicable reason, to collect all the orange dots scattered around each maze. Of course, it wouldn't be an alien world without aliens, and aliens there are aplenty. Nasty red ghosts haunt the corridors; disembodied eyes follow you around; fire-breathing dragons try to fry you to a crisp. Not a very pleasant place at all!

It's not all doom and gloom though. Littered around the mazes are various inanimate objects that are there to help you; food to keep you going and keys to unlock doors and chests (which contain surprise goodies). And there's also magic to collect and use in your time of need... 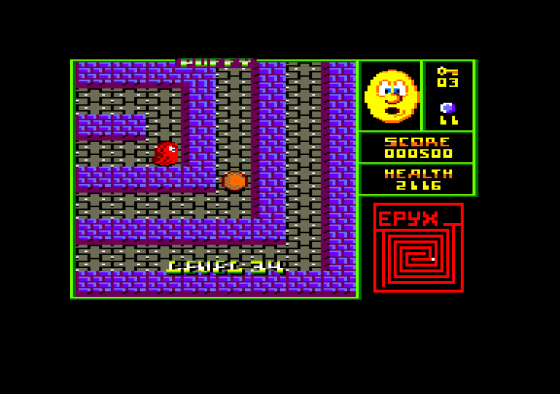 Sound familiar? Yep, Puffy's Saga is a Gauntlet clone. A very cute Gauntlet clone, though The mazes are in a very similar in style and layout to the coin-op classic. It features the same type of puzzles - keys and doors, for example, work in an identical fashion. There are also walls that disappear when you collect a certain icon, and walls that you can shoot your way through.

The feel of the game is, however, different to Gauntlet. The cartoon style of the graphics take cuteness to the extreme so much so that you'll be reaching for a brown paper bag if your stomach's not strong enough.

Mr. Puffy himself is a very stout fellow. In fact, he and his girlfriend share the build and colour of a tennis ball. All that distinguishes the pair from each other is that she wears a red ribbon in their hair - unless Puffy himself is a bit of a strange one... 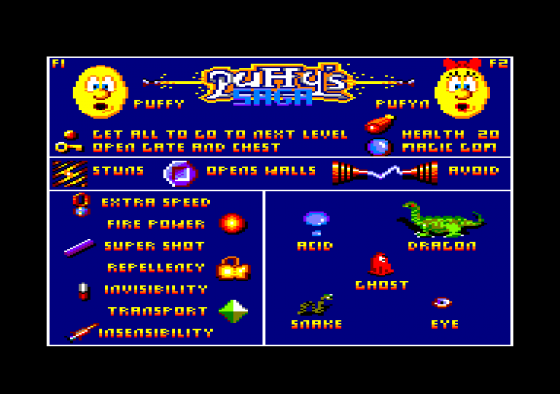 In fact, they bear more than a passing resemblance to Mr. and Ms. Pacman. And, in the game, you can choose to control either character. Puffy is more powerful, but Pufyn (for that's the damsel's name) is a better mover [That's enough innuendo! - Ed].

The on-screen playing area is fairly small, but scrolls quickly and smoothly. The sprites too are tiny. They are well detailed, however, and because the characters are simple ball-shaped beings; they're very good looking, graphically.

The principle of the game is familiar. All the dots must be collected before you can pass to the next level. Also to be collected are items that give you extra firepower, invulnerablity, speed and all the usual stuff. And magic 'Goms' can be accumulated and used at appropriate times. Here you can select the effect that the magic has. You can use them to boost your flagging life force, swap between Puffy and Pufyn, or to conjour up a map to aid your direction-finding.

One aspect of Gauntlet that Puffy's Saga doesn't duplicate is a two-player mode. This is a real pity, as it was one of the former's most attractive features. The ability for two people to play simultaneously side by side or against each other added a lot to the game.

The first seven levels of Puffy's Saga are played in a set order. After that, they're selected randomly. This enables you to explore many different levels without having to play for hours to get to the same point.

Your energy depletes at a fair rate, and to stem the flow you've got to find the grub that is generously littered all over the place. Contact with anything that moves does no good at all to your constitution, and accelerates the rate that your life force slips away. Ghosts are most common foes on the earlier levels. These can be killed with just a few shots, but walking into the corpses left behind is just as deadly. Later levels introduce the acid pools, eyes, snakes and the fire-breathing dragons - the most deadly of all.

The music on the title screen is bears a curious resemblance to the Ghostbusters theme tune. It doesn't actually play through the game itself, but that is more than made up for by the brilliant spot effects that accompany the game. Instead of the usual blips and beeps, digitised squeaks and chomps play throughout. The speech, though not exactly intelligible, sounds cute and fits in well with the game's theme. "Hello Puffy" it chortles when you start, and "Oh, oh", and "Going to die" it wails when health gets critical.

Puffy's Saga is an extremely polished maze game. The graphics and sound are superb and alone are enough to lift it above the crowd. It won't be to everyone's taste, but if you enjoy exploration games then get puffin'!

An instant classic. It combines elements of Gauntlet, Skweek and Marble Madness hilariously to create a thoroughly enjoyable and very addictive game.

Staying Power 79%
P. Lots of screens
N. Will there be enough?

A mega-cute maze game that combines elements of Gauntlet, Skweek and Marble Madness hilariously to create a thoroughly enjoyable and very addictive game. 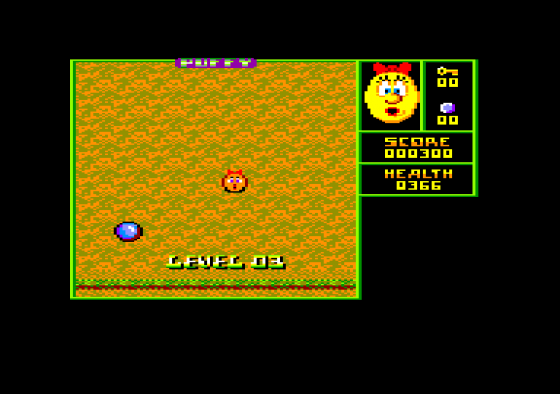