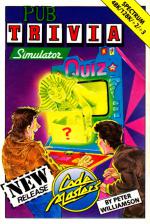 It's a simulator so it must be... Codemasters of course. But before you begin to simulate a rather deep snooze, just hang on. I've simulated with the best and Pub Trivia is actually very good. Okay, so the simulation doesn't include a pint of Dr Cringeworthy's Olde Bowel Remover or the pub drunk propped up in the corner waving his wad about. Oh no, but the game itself is an excellent simulation of the trivia arcade machine with one notable exception - it doesn't pay out money to smarmy, brain-boxes but it does give you the chance to win extra ten pees, which means that you earn extra lives and can carry on until you've got a superb score.

There are over 2000 questions on the tape covering four topics. Pop Music, Show Biz, Sport and General Trivia (whoever HE is!) There are also joker cards which are not at all funny but do allow a player to leap up one level of questions without having to answer a question. No points are scored for this but the crux of the game is getting through to the money maze by answering the top card question.

Each games begins by selecting the number of players which can be anything from one to four. Each player then selects which contestant's face they want to represent them. There's a choice of five faces but they all look as daft as a brush and half the use and really make very little difference to the game.

You begin with one 10p stake (skinflints!), and this represents the one life you have. The screen shows each player's points, cash and dozey looking face and a set of question cards with five in the bottom row, four in the second and so on up to the top card. You work your way up by choosing each card by moving the pointer left and right and entering each choice. A little bit of planning and a pinch of luck should mean that you choose a route that asks only the questions that you're better at.

Each question pops up onto the screen along with three answers A, B or C. Move your on-screen finger above the chosen answer and press fire or enter before the time runs out. If you don't know the answer and there's no pass available, cross your fingers and guess after all there's nothing to loose except an imaginary ten pee.

If you get through the first stage then it's on to the money maze. Moving faster than a (art in a lift, get to the top of this stage and you'll start winning some cash and be able to get onto the high score table.

There are three blocks of questions each of about 700 questions - the first block always loads in automatically with the game and we all think it's a great game. All of us huddled around the spectrum, pressing buttons jeering and shouting... reminds me of the war. At the bottom of the garden in the Anderson shelter, playing snakes and ladders, with Great Uncle Eugene bent double over the prostrate form of my father trying to prise a bottle of gin out of his hands. The Good Old Days? They were absolutely crap! I wish I'd had a spectrum then...

Educational and great family fun. What more could you ask for a miserly three quid?

Educational and great family fun. What more could you ask for...?