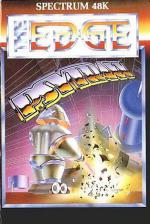 The first thing you notice when loading is that the program has a fast loading routine in it. This loads the program in less time than normal.

Claiming more than a thousand screens, the action takes place inside a computer. Now where have I seen that before?

You have to collect master keycards in order to gain access to a CPU, which is at the heart of every computer. There are, of course, adversaries, such as flying chips (IC's, transistors, and the like, stop me if you've heard it before. The action is fast and furious, and energy has to be replenished every now and again.

I haven't quite figured out the scoring system, maybe that's because I have only just discovered a firing key. The press release sheet gives all the controls, with joystick options on screen, but there is no mention of a key to fire a retaliatory blast.

In case you are expecting one thousand locations I had better add that they are variations of a maze, with PCB track representing the walls. Better than the average game in this class.

Better than the average game in this class.