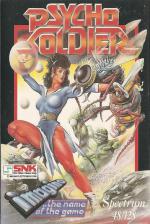 Why, then, is this arcade extravaganza - in which heroine Athena "cuts a bloody swathe down through the demon-infested hell of an oppressed world" - so pedestrian?

Once you've realised that the melon-breasted heroine on the cover is actually represented by a smurf-like gnome in the game, and that this sequel is basically the same idea as the original game Athena without the pretty background graphics there's not much left to be excited about.

Psycho Soldier - a pretty inappropriate title if you ask me - is a three-level romp in which heroine Athena is armed with psychic blasts, bombs, and if you can find and pick up the appropriate icons, an invulnerable shield.

A flying saucer, which can shoot down a few enemies before it deposits Athena on the screen, starts each life. On the first level, Athena, surrounded by her revolving bombs, has to waddle through the caverns, jumping from level to level to avoid zombies. Stone walls can sometimes be blasted out of the way, and sometimes have to be avoided if you don't want to be crushed as the screen scrolls along.

There are six levels, each comprising thirty screens, and on each level some of the blocks are blasted aside to reveal icons which will augment your laser power, energy, or bombs. Each screen is displayed in a single colour. At the end of each level is a giant monster - on the first, a rapidlystriking snake - which can only be destroyed by a judicious combination of lasers and bombs. If you can find and destroy the egg, and shoot the globe which emerges from it, you will become indestructible until your energy runs out.

As you might have gathered, Psycho Soldier is competently done, nothing fantastic.

The sound effects, even on the 128K version which plays in in one go rather than having to be loaded level by level, are unremarkable, and the collision detection likes to please itself so you can't be too confident about finely-judged manoeuvres.

Much like Athena, but without the graphic invention. Fails to set the pulse racing.

Much like Athena, but without the graphic invention. Fails to set the pulse racing.