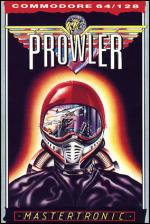 The objective of Prowler is to defend the humble planet of Ferantoo, under attack from the evil Peraclusians. Piloting a Northall Q15-C helicopter, the player engages in one of ten missions, each having five skill levels.

The planet is represented as a 3D scrolling landscape, over which enemies manoeuvre in tanks, aircraft and motherships. Five types of weapon are available with which to oppose them: a heavy shell and four knds of missile for ground/air combat. Shield power protects the craft from alien projectiles, and regenerates with time; should it expire, the game ends. At the end of each mission a status report is given on the player's performance.

From the cockpit display, you would expect Prowler to have combined the best features of Super Huey with those of Skyfox. In fact, it does manage a competent stab at emulating these two flight/combat simulators, but then you realise that they were both released some years ago, and have since been surpassed frequently in both addictiveness and playability.

There is little to Prowler's gameplay apart from swooping about and blasting, so apathy tends to creep in halfway through the first game. Other little discrepancies such as the sluggish controls which make combat at speed difficult, didn't have me adhered to the joystick for very long.

Despite the alien storyline, Prolwer is very derivative in its graphic design and inspiration. Unfortunately it's a case of nice looks - shame about the gameplay.

The range of scenarios doesn't count for much, since in practice they're virtually the same, differing only in the number of aliens. The same applies to graphical movement: most of the time it feels as if you're simply rotating in a barely manoeuvrable helicopter.

The 3D effect is similarly redundant because the horizon never grows nearer and there are no ground features apart from aliens; as a result there's no real impression of speed. There is some appeal in shooting oncoming aliens, and the targetting system works well, but the action is too limited to make this an essential purchase.

Graphics 43%
Poor use of colour and ineffective 3D movement.

Hookability 62%
Frenetic blasting and mastering the controls proves addictive for a short while.

Lastability 30%
Although there are a host of missions, lack of real variety discourages continual play.