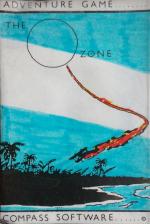 It was a very busy issue last month, so perhaps I can be forgiven for missing the full significance of the Golden Mask release from Compass. I can't remember being fully aware that Golden Mask was in fact the final part of a trilogy, begun by the famous Project X - The Microman, a game which later teamed up with three others to form the Tony Bridge Four Adventures.

Well, The O Zone is the second part of that trilogy, so you might say it's being reviewed somewhat late, and bear this in mind when considering some of the criticisms which may relate to programming of bygone days.

In some ways it was worth waiting, as the cassette now has a high-standard inlay - a welcome change when even large software houses send preproduction cassettes barren of all gloss. The screen display is most colourful, as was the case with Microman, with colours used to good effect to split up the text in the location descriptions and in the useful list of vocabulary given at the start.

This list serves notice of the absence of a HELP command and also points to some pretty peculiar uses of vocabulary such as SWITCH SWITCH and STICK BACK, this last referring to an operation carried out in an aircraft. More helpful and intelligible are the abbreviations G and D, which carry out a GET and a DROP respectively (though DOWN must therefore be spelled out fully).

You begin the game trapped inside a corridor. One direction is blocked by a large steel door while the other leads to what must be one of the quickest instant deaths in adventuring. The pictures in these opening scenes aren't altogether impressive and leave you with the feeling you've seen just one too many walls - blank walls!

Where a picture exists, it's shown on first visiting a location, after which it untidily scrolls up off the screen in jerks as you input below. On the aesthetic side the redesigned zero in the '50p' and '£10' aren't up to much either, looking like gnarled potatoes. But beyond looks there are some major concerns when it comes to the meat of the adventure.

One problem is the absurd story line, which is so banal it might be some sort of joke. Finding Sop by a computer console, you very shortly need it to pay the bus fare to the airport which is of course exactly 50p. Not too implausible, you might suppose, but then the wallet episode begins. Getting the wallet is somewhat unorthodox, with the conductor on the bus calling out to tell you you've left your wallet, and throwing it to you (in general, objects, often found with a token graphic by them, just materialise).

The next stage of the wallet saga reveals a rather strange aspect of the program - you must drop a container before its contents can be revealed. You see this later when you hold an envelope the wrong way round so that a key falls from it.

In the case of the wallet, 'As I open the wallet, a man runs past and tries to snatch it. It slips out of my hand and all of its contents are out. The man grabs the wallet and runs away'. The contents turn out to be a traveller's cheque and a ten-pound note which together make £110, which just happens to be the cost of your airline ticket...

Getting this ticket reveals yet another facet of this adventure - examining things magically transforms your chances of doing anything with them. It is seen at the vines where examining them first makes them more able to carry your weight, and when purchasing the ticket, where examining the lady (rather than talking to her) has her hinting that you might get somewhere by buying a ticket. Without examining this lady at the information desk you, for some inexplicable reason, can't purchase the ticket.

As the O Zone is the second part of the Microman trilogy, it takes the story of Professor Neil Richards, his Project X miniaturisation experiments, and the COM 2 high-tech computer one stage further. It's a game born of many utilities - the Quill, Illustrator, Press and Melbourne Draw.

Despite the appalling plot and curious vocabulary, I couldn't help but develop a soft spot for the O Zone, what with its colourful presentation, and music and sound on the 48K (the 128K has a quiet sound set against a noisy background of interference on the television speaker).

It would be silly to miss out the middle game of the trilogy, and I suppose that's the beauty of marketing them! The O Zone is obtainable mail order from Compass Software, 36 Globe Place, Norwich NR2 25Q.

Despite the appalling plot and curious vocabulary, I couldn't help but develop a soft spot for The O-Zone, what with its colourful presentation.