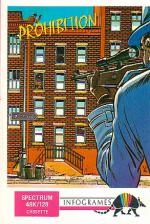 Hi there. You may know me. The name's Sprog, Sam Sprog. Okay, so you don't know me, but that's not important right now. What's important is that they are after me. No, not the inland Revenue, but - the Mob. They're everywhere, and - wait a minute, who's that at the window?... BANG!... Aaargh! Caught in my prime by an... uhhrrr.

Poor guy, caught in his prime by an uhhrrr, and just as he was about to tell you all about Infogrames' new shoot 'em up, Prohibition. The idea's this - you control a gunsight which has to be manoeuvred across several run-down Chicago tenements to pick up and despatch a gangland killer who's trying to do the same to you. It's hard - first you have to find the critter, and you only get a few seconds to do it. But all is not lost, as you can reach the required block (usually made up of two columns of five or six windows) before the clock starts. If you don't find him in time, rest assured that he'll find you. And it's not just a case of find the window and blast the bad guy, oh no. They don't just fire out of windows - they fire from the rooftops, the fire escapes, the attics, the basement grills, from the street and even from under manhole covers!

The graphics are black on white, although the pavement is pink(?) Everything's very well defined, and if the scrolling's a little jerky, it doesn't detract much from the gameplay. I also like the way that the baddies, when killed, either slump forward or get blown backwards. And whenever you fire a shot, the sights move slightly off target, as they would in real life. One gripe is that there's barely any sound, and the music's nonexistent. And the gameplay definitely reminds me of an arcade game that did the rounds a while back. In all, though, it's an entertaining enough reaction test from those clever chappies across the channel. Hang on, who's that in the window? it's our Ed! What's she doing up ... BANG! ... oh, that's what she was doing. Caught in my prime by an... uhhrrr!

A good fast shoot 'em up in the Cop Out format. If you like target games, this one's a must for your collection.

If you like target games, this one's a must for your collection.