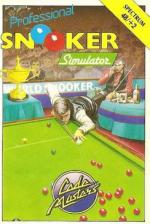 The snooker game with the trendy title brings the excitement of the top class game to the Spectrum screen at a budget price.

Despite the curious colours of the green and brown balls, the game features remarkably smooth action, a new twist to controlling the white and a replay facility so you can watch your best shots (or flukes!) again!

The game is actually the Spectrum version of an Einstein game written by Hard Software now converted for the Spectrum and released under the new budget label.

The game is for only two players, although there is a demo version between to good computer players... it's a shame you can't play them!

Lining up your shots couldn't be easier with a cue showing the direction and a large white ball at the top of the screen used to position the cue for those impressive screen shots. If you're aiming at a ball (and not a cushion) then this appears behind the white so that you get a head-on view to judge the angles. This has a remarkable effect on the accuracy of your shots and is more realistic than other systems found in lesser games.

Finally you can develop your skills during a practice version where you can move the balls to any position and even reset them to replay the shots. For once, the cheapest game is also the best.

It's the cheapest snooker game for the Spectrum... but it is also the best.