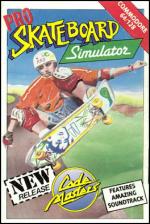 After years of skating about, sending pedestrians running for cover and learning all the words in Dr Evans' Dictionary of Totally Radical Slang, you're finally a professional skateboarder.

Your job requires you to leap and skate around scrolling 3D skateboard parks, collecting lots of flags which are making the place generally untidy. Time, of course, is of the essence, and if you don't clear up the flags pretty damn quick, you have to go right back to the beginning of the course and start again.

If you do finish, play progresses to a vertically-scrolling cross-country race, in which you have to skate around trees, between buildings and over bridges. Again, you have a set space of time to skate the course and collect pairs of flags arranged as gates.

Beat this and it's on to the next of the seven levels.

This game and Pro Ski Simulator certainly represent a marked improvement over some of the other ropey Simulator titles. Both sections of Pro Skateboard Simulator are very well presented graphically but I'm a little dubious about the game's lastability.

It's really difficult to beat the second level's time limit, and if the parks after that are even more demanding, then either I'm missing something or they have to be nigh on impossible.

As Codemasters' Simulators go, this has to be one of the best. For a start it has GEORDIES OK written in the high score table!

The game is really well presented otherwise, with loads of player options and even a hidden game (though I couldn't actually get it to work!). The main game is just as good, with two very playable sections, the first of which resembles Atari's 720 Deg. Play is a little difficult on the later levels, but I didn't find the enjoyment wearing off for a quite a while.

Presentation 86%
Lots of options to change number of players, lives, joysticks and the ability to restart on the last level reached.

Hookability 79%
Excellent presentation makes the action easy to get into.

Lastability 70%
Seven levels, but high difficulty level makes any progress beyond the second rather frustrating.

Overall 79%
One of Codemasters' best 'Simulators' yet, but probably more suited to the more accomplished gamesplayer.

One of Codemasters' best 'Simulators' yet, but probably more suited to the more accomplished gamesplayer.