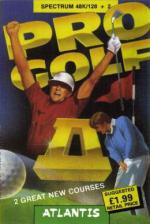 It's off to the links once again, and your bag of clubs hangs heavy on the caddy's shoulder - but that doesn't worry you, because you're about to play some great golf.

Two courses are available to you, Lytham and Royal St George's. On each you can decide whether to play a single round, or a four-round pro championship against up to 17 players. The prevailing weather and ground conditions can be set, or given a random element. The wind speed and direction are vitally important, as both can seriously affect the flight of the ball.

At each hole you can select one of 13 clubs. Club selection is made with regard to how the ball is lying, on what type of surface (fairway, bunker, rough), and how far it needs to be hit.

The strength of the swing is another variable. There is also the possibility for backspinning.

Once the ball has been hit on to the green, the putter is automatically selected as the appropriate club, but you still have to determine the direction and strength of the shot. This time the slope may be the problem.

As with all golf courses, there are hazards like sand bunkers, and on these courses in the game there are water traps and some areas which are out of bounds. If you get stuck in one of these, only certain clubs may be used to get you out and back in the contest.

Joysticks: none
Graphics: bad use of colour with simply-defined targets and scenery
Sound: barely a beep to be heard
Options: championship or medal competition

'There have been dozens of golf games released over the years especially budget ones. But Pro Golf II seems to have taken features from lots of versions and put them all together to produce a very well presented and playable game. The great thing about this golf game is its so easy to play and understand what's going on even with its sickeningly bright colours.'

'Pro Golf II is bad. Seriously bad. The graphics are chronic, the gameplay is worse.'

'There 's no doubt about it, if you don 't know everything there is to know about golf you won't understand, let alone like, Pro Golf II. Rather too much has been crammed into the screen and I find the same problem as with golf on TV: the ball disappears because it is so small and the background so fuzzy. Atlantis set themselves a hard test trying to turn golf to the computer and they failed, miserably.'

Atlantis set themselves a hard test trying to turn golf to the computer and they failed, miserably.