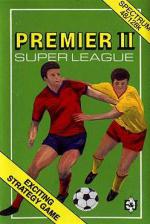 More footie sim "fun", this time from E&J, dread rivals of Football Director's D&H. Confused? Yes, me too, but this game apparently came the same route as the aforementioned Football Director - months of steady sales on mail order, before E&J put it out on the open market.

Just as well it's a cheapie, then, because it's not really up to the Football Director standard, although it's a brave try. All the usual features you'd expect are crammed in here - loads of info, minute-by-minute matchplay, enormous waits for the computer to work out the results(!) - but there isn't the cast-iron addictiveness of Footie Director, nor for that matter Soccer Q (reviewed elsewhere).

It's definitely an improvement on E&J's earlier games. but it's just not different enough to work in its own right. A goal kick, I'd say.

A definite improvement on E&J's earlier games, but just not different enough to work in its own right. A goal kick, I'd say.