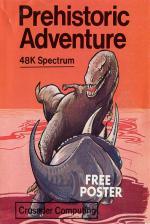 The story starts in a mist-shrouded Stonehenge. An old man is struggling for survival, his supplies of the Elixir of Life having run out. Only if someone can find the legendary Amaranth fruit can some more of the Elixir be brewed. The only known source of the fruit is on a remote island and you, Ohio, have been charged with the task of finding it and returning home again.

Although entitled Prehistoric Adventure, the game features elements from a variety of time scales. Thus in the first few locations, you encounter yachts, cottages, market stalls and burger bars, none of which made a great impression in stone-age society. Nor did prehistoric monsters roam the earth then. Nor was (or is) Stonehenge a short distance from the sea. Some of you may say "So what - it's all make believe anyway?!" but the cohesion of the various story elements is an important part of the game. You can't imagine Tolkien getting away with a storyline like that.

The game itself is difficult. Not so much because of the problems, but because everything has to be done in a very precise order. This dominates the game to such an extent that solving the problems becomes of secondary importance. Input of text is restricted to verb-noun which means that you sometimes have to search for a precise combination of words. There is no four letter cut off for words either, so that if you want to type 'enter restaurant' this must be typed in full every time. Again, nothing too important but not particularly user-friendly, especially if, like me, you are still using a rubberised Spectrum keyboard. The main failure in the parser is that 'examine' is not recognised at all.

There are other problems with the game too. At one location, you are told that you can see the sea stretching away to the South. Roads lead south, down and north-east. If you choose to go south, you promptly fall straight in the sea and drown. Now I don't mind falling off a cliff that I've been warned about but it narks me intensely if I'm told that it is all right to go in that direction in the first place. Upon being killed, I was given the message 'load a saved position'. Nothing about 'do you wish to restart' or similar. Eventually, I tried 'load' even though I had not previously saved a position and a default Ramsave took me back to the start. Again, not particularly friendly.

It is never easy writing awful things about a game, especially when it is from a new company trying to break into the market. At just under £10, Prehistoric Adventure really is very poor quality and the presentation is more akin to a game of 1983 vintage rather than 1986. I would strongly suggest that Crusader take a long hard look at the presentation of companies such as Level 9 and see just what sort of things they are offering in quality for the same price.

Really very poor quality. The presentation is more akin to a game of 1983 vintage rather than 1986.