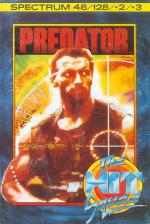 Originally released by Activision, the player moves Arnie through four enemy-filled jungle levels in his search for a missing helicopter and its crew. All is not as it seems, though, because out there in the dense undergrowth is an alien hunter - and you're its prey!

Four levels may not sound like a lot, but the lack of stages is compensated for by some incredibly tough gaming, with poor Arnie chopping and changing guns as if they were socks! Graphics are of well above average quality, especially the main Schwarzenegger sprite which sports a trendy flat-top hairstyle.

A brilliant game which captures the spirit of the film and, indeed, the star himself. Miss this at your peril!

A mostly green screen lessens the overall impact of the game, but the larger sprites and even trickier play make up for Predator's monochromatic shortfalls.

Mega-tough arcade blasting in the more than amicable company of Schwarzenegger and Co - in other words, a fab piece of re-released software!

The colourful graphics of the C64 version and the Spectrum's difficulty level combine in Amstrad Predator to give CPC owners a smashing game.

A brilliant game which captures the spirit of the film and, indeed, the star himself.