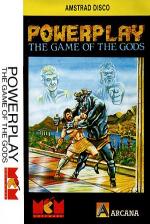 The game is subtitled' 'the game of the gods', which conjures up an interesting image of Greek gods sitting around asking each other inconsequential questions like, 'What's the booby prize on the TV show 3-2-1?' Now that's my kind of game and I suspect a lot of other people's too. It combines this quest for the trivial and absurd with a well designed and implemented game.

The action takes place on a single screen where an 8 x 8 grid of squares forms a courtyard on which 2, 3 or 4 players can wage a battle of wits and speed. Each player controls a team of four warriors who have to eliminate all the warriors from the other teams in order to achieve victory. The squares are in five different colours: four general question areas and special teleport squares.

Each player takes it in turn to select one of his four warriors to answer a question, the subject depending on the colour of the square he's on. Choosing the correct one of four possible answers will score the warrior some points and he will be able to move to an adjacent square. A wrong answer will pass play on to the next player.

As each warrior scores points for correct answers he can mutate into more powerful forms - an advantage when it comes to battle. The lowest is Hercules, going through Cyclops and Minotaur, to the strongest, a Satyr. These mutations are carried out very nicely on screen: the warrior spins round and then slows to a halt, mutating in mid-spin.

If a warrior tries to move onto a square already occupied by an opponent's warrior, a challenge will result. The two have to try to answer a question first in order to win the battle. The loser gets demoted to a lower warrior level, and disappears completely if he was already down to a Hercules. The game continues like that until only one player's warriors are left on the grid.

The difficulty of the questions varies with the mutation level of the warrior: toughest ones for the Satyr and easiest for the Hercules. There are also four different skill levels, which change the time limit for answering a question. Maximum is 10 seconds and minimum is 2.5, which is hardly enough time to even read a question!

There are four readily-prepared question files that can be loaded in, each one consisting of over 500 questions, or you can prepare your own. They are well-designed not to repeat too often but inevitably you will become familiar with a particular file.

This doesn't matter much. With two experienced and well-matched players, it becomes a battle of moving best tactically, and answering questions fastest in a challenge. This can result in very long, hard-fought and exciting games.

The combination of a trivia quiz, an enjoyable game, good graphics and a question compiler make this a great game. When played by four players, be they newcomers or old hands, it can be very absorbing, competitive and above all fun. The perfect game for anyone who wants to play with computers and be sociable.

I hate computer quiz games, but this is really very good. The thought and effort that went into the game really pay off. There's no getting round repeated questions, but Arcana manage to turn them into an acceptable game feature. The graphics are great, and the board-game itself is original and fun. Good stuff!

Remember those TV ads that showed a happy family sitting around a computer screen? Well here, at last, is a game that is really like that. All the fun of Trivial Pursuit with all the benefit that the Amstrad can provide as well. Great fun for all the family!

The actual colours of the squares aren't too easy to work out, but that's not really a problem since you can see they're different.

P. Good colourful graphics and appealing animation.
P. Well thought-out and presented questions.
P. A good multi-player game, not just a bunch of silly questions.
P. Very competitive and enjoyable, even if you know the questions well.
P. Over 2,000 questions and a compiler to create your own.

N. If you haven't got anyone to play against.
N. You'll still need some interest in trivia games.

The second side of the game tape has a question compiler, allowing you to create whole new groups of questions on whatever takes your fancy. It won't let you alter the four existing ones though - after all, that would be cheating.

You can select the four colour-coded subjects into which questions are grouped - you don't have to stick to the original ones of general knowledge, sports and leisure, science and technology, history and geography. You can concoct your own for whatever you're interested in.

Each question has to be classed in one of the four difficulty levels, and three alternative answers must be given along with the correct one.

How much use you make of this facility obviously depends on you, but I'm sure people are already rubbing their hands with glee at ridiculous and humorous questions they can torment their friends with.

When played by four players, be they newcomers or old hands, it can be very absorbing, competitive and above all fun.