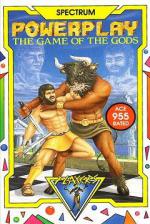 This month sees two new releases trying to put a new twist on the basic, N quiz format, with the budget release the most innovative.

The basic setup has a board with two to four opponents taking part, each with four warriors in their own corners. Initially all of a player's warriors are at level one (difficulty) except a single level two character. The computer then goes around the players in turn, asking them to select which warrior they want to move, then presenting a multiple-choice question of the category indicated by the square the warrior's on. (The four categories are general knowledge, sport and leisure, science and technology, and history and geography, each represented by a different shaded square.) If the question's answered correctly within the time limit the player gets to move the warrior one space. In either case the computer moves to the next player - avoiding the boring sessions when one player gets a string of answers right.

If a player answers very quickly, and correctly, wisdom points are awarded the warrior collect 25 and an option is given to move on to a higher level. The higher the level the less chance of being killed, but the questions become harder too, so it's more difficult to move. But it's also possible to move around the board by standing on one of four teleport squares - step on one and you randomly appear on another, or even the same square.

The aim of the game is simply to wipe out all your opponents' warriors in challenges. These are begun by trying to move onto a square occupied by an enemy warrior. The winner of the challenge is the first person to select the right answer to the challenge question, or the person who did nothing when the other got it wrong. The loser's warrior is down-graded a level, or killed if at the lowest level.

Despite being entirely monochrome I really like the look of this game, especially when a character spins out of existence. Sound is nonexistent, and questions repeat themselves too often, but this is an entertaining trivia game at a great price.

Joysticks: Kempston, Sinclair
Sound: only a few beeps on the frontend
Options: two to four players can compete. Four difficulty levels for time allowed to answer questions, and four question-loads

'AII trivia games suffer from repetition of questions but Powerplay minimizes this by awarding wisdom points for very fast responses. Powerplay's other innovation - chasing opponents around the board for combat is great, but once an opponent has just one warrior it's very hard to catch him. Another slight flaw is that players' pieces look the same, which can be confusing. Nevertheless this is a novel, and very playable trivia game.'

A novel, and very playable trivia game. A slight flaw is that players' pieces look the same, which can be confusing.