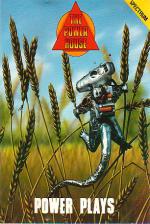 There's a good deal of variety in these eight back-catalogue Power House titles, but precious little in the way of quality. Worst of the lot is Cyrox, so full of bugs that at one stage all the backgrounds disappear completely. How's this for an intro: "A valueable (sic) shipment of crystals has been stolen... there (sic) whereabouts has (sic) been traced to Cyrox... headquarters for public enermy (sic) number one... " The game's as good as the grammar. Time Flight is a fair Time Pilot rip-off. Sword and Shield (the best thing on the tape) is a neat Kingdom-style strategy game. Tomb of Syrinx, an average arcade-adventure. Hercules decent platforms-and-ladders. Sqij, a shooting and collecting scenario. Slingshot, a Star Trek-type space zapper, and Oddball, a battle to push radioactive blocks into a disintegrator.

Only worth bothering with if you don't have any of these titles already.

Eight games for a tenner. Good value you might think - but then look at the quality of the games...

Eight games for a tenner. Good value, you might think - but then look at the quality of the games.
Logout