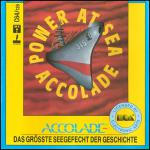 It's October 1944, and the Pacific theatre resounds to American and Japanese naval artillery. The Leyte Gulf in the Philippines was to prove one of the most decisive sea battles of World War II, in which the US Fleet first came across Japan's latest weapon - Kamikaze pilots.

In Power At Sea, the player takes command of the three-ship Allied Naval Force and guides it through the Leyte gulf on a 96 hour mission to capture four Japanese bases.

The game begins on a resource selection screen where the player choose the fleet's quota of bombers, fighters, Marines and fuel. Moving to the Bridge screen allows selection of Communications, Damage Control, Navigation and Weapons operations.

The Communications screen monitors incoming messages, while switching to the Damage Control screen shows side elevations of the vessels with hits marked in red.

The Navigation screen displays a map of the Leyte Gulf area with the positions of enemy bases and air strips. A ship symbol identifies the position of the fleet which is navigated along a three-point course, with the option of accelerated time to quicken the action.

Four battle options are available on the Weapons Operation screen: Launch Planes, Man Large Guns, Assault Base and Man Anti-Aircraft Guns. The former two optons come into play when an enemy destroyer is spotted on RADAR. The first offensive to be launched is an air strike for which a number of fighters and bombers are chosen. Viewed from the cockpit, the player controls first the fighters and then the bombers in an attempt to disable the enemy vessel.

Alternatively, the player can wait until the destroyer comes into visual range of the Allied heavy artillery. The display then splits to show a binocular view of the enemy and one over the gun turret. Once in range, and after altering the elevation of the guns accordingly, a volley of shells is fired at the enemy, hopefully with a devastating effect.

The large guns are also used in enemy base attacks. A similar view scrolls from right to left as the battleship moves slowly along the coast, which is riddled with gun emplacements. At the end of the beach lies the enemy stronghold consisting of three concrete bunkers which, if hit, seriously weaken the base. At the end of the bombardment, a report shows the strength of the base, which is vital in determining the number of Marines to send to secure the base.

The final threat to Allied success is that of air attack by enemy fighters. The player controls an anti-aircraft gun and targets planes approaching from over the horizon in order to destroy them before they inflict damage on the fleet.

The game ends when either all four bases are captured or the Allied task force is unable to continue with the mission.

The presentation behind Power At Sea is extremely good, from the lengthy instructions and excellent demonstration mode to the monochrome scene when you're relieved of command.

As with The Train last month, it brilliantly recreates a wartime atmosphere, chiefly through the use of still shots and newspaper reports. The sound effects are accomplished enough, even if the title track has strong echoes of a 'Stars on 45' naval remix!

The only detraction from this high quality is the gameplay: even though the planning of a raid is involved and diverse, the execution of it proves rapidly tedious. Take a look before you buy.

At first, Power At Sea seems to be a complex and involved naval simulation, but once you get into it you realise it's little more than a pretentious Beach Head clone.

It tries to be an 'arcade/strategy' game but is very poor in both of these areas. The 'arcade' scenes are very weak indeed, from the simplistic island bombardment to the uncontrollable aeroplane flights, there's nothing to grab your interest and draw you into the action.

The 'strategy' part is virtually non-existent and just involves moving the ships to the next base. One of the most frustrating aspects is the invasion, which is merely a series of naff pictures and white noise sound effects over which you have no control.

On the whole the graphics lack atmosphere, and the coarse sound effects add nothing to the proceedings. If you want an enjoyable naval combat game, go for the far superior Strikefleet.

Simulations seem to be a rapidly multiplying breed on the C64 - a commendable trend in my opinion. Some of the naval ones we've seen recently are particularly good, and have set a very high standard for the likes of Power At Sea to beat.

Graphics are sometimes blocky and drab and they let the game down, specifically in the pre-action scenes which could have added even more to the game. It's a pity that these minor flaws weren't spotted by Accolade because, without them, Power At Sea would have been an excellent game instead of just ranking as a good one.

Presentation 84%
Well presented, both on and off screen.

Graphics 64%
Not as good as they could be, but representative of the action.

Hookability 70%
Relatively straightforward, and easy enough to get into.

Lastability 64%
Only one mission to complete, but variable resources give it some lasting appeal.

Overall 69%
A reasonable development of the Beach Head theme.

A reasonable development of the Beach Head theme.