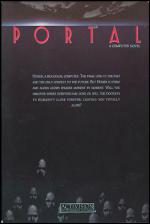 "I've always been something of a loner. That's why I volunteered for this mission. Yet this empty world below scared me.

I came in over Florida. I knew it had to be Earth. But the broad facilities of Canaveral were nothing more than a grassy field, although the outlines and monuments of the old launch facilities were still there - and seemed to be in good repair.

Now that I've landed I can see that their preservation is less than perfect... it's as if everyone had stepped out years ago and not returned."

A lone space pilot has returned from a one hundred year voyage, only to find that every human being on Earth has disappeared. Animals and plants live and grow amongst the rubble of biodegradable buildings, but there are no human remains to give any clues as to what happened. The world is quiet and peaceful.

After months of searching for answers, the pilot finally stumbles upon the entrance to an underground silo. After spending weeks wandering its empty, dust-filled corridors, he discovers a computer terminal with its switch turned to the on position. It is from this point that the player comes into the story...

Before the computer can be properly accessed your ID has to be input, in the form of a name or DNA structure. The computer then reads it in an attempt to make an identification. Failure to recognise the input results in the display of an introductory sequence before the computer data is accessed. However, if the name was used in a previous game in which the save feature was used, the computer asks whether or not you would like to continue where the story left off.

When the computer is finally accessed (either at the beginning of a new game, or at the continuation point of an old one), a man display appears with four icons below. Inside the main display area are twelve icons representing the twelve databases within the computer network, which can be scrolled on and off the display using the cursor keys or joystick. The icon which appears in the centre of the area is considered active, and a text read-out at the top of the screen reveals the name of the database it represents. The database can then be accessed by pressing the return key or the joystick fire button.

A window containing text files opens up over the main display area when a database is entered. Any of the text files can then be selected and read - the computer adds a tick to a file once it has been accessed so that you know what has been read and what hasn't.

The most important of the twelve databases is Homer - the last active Artificial Intelligence computer on Earth. Homer also wants to discover where all the people have gone (and why), and tries to help by expanding upon any data uncovered - where possible. Though Homer's memory has faded with time, portions of it reopen as you read through the files. A miniature version of the Homer icon resides at the bottom of the screen, and can be accessed at any time for help - even when using another database. Homer's icon flashes to attract your attention if he has anything new to tell you. Accompanying the Homer icon at the bottom of the screen are three other icons: Close Window and Return to Main Display, Close Window and Return to Database, and Save Current Position to disk.

As the story progresses, more and more of the mystery is revealed. The user is also given a detailed insight into the major points of history and the style of social life between 1990 and 2079. Can you uncover the mysteries of Portal?

I love this type of Science Fiction story - consequently Portal appeals to me in a very big way. An amazing atmosphere is generated by the superb packaging, graphics and sound, and when you get into the story it's difficult to stop and go and do something else.

The sheer depth of the program is absolutely incredible - there's a hundred year summary of history with detailed files of the major events, personality profiles, personality event files and, of course, there's the mystery of the disappearing humans to uncover. What may put people off buying this program is the fact that it's not a computer game: it's an interactive computer novel where you move along a set track. Consequently, you can't really influence the action, but it does feel more like you're being dictated instructions by Homer and acting under his guidance.

Another point to argue is that once you've played it through, you won't want to play it again. But can't the same be said about books or films?

Anyway, when you consider that it took around five and a half hours solid playing to finish one side of a disk you can't really moan too much about short-term appeal. I think this is one of the best programs I've played in a long time. Alright, so it's twenty quid, but this is fifty times better than many games we've seen recently which cost half as much. If you've got a disk drive and are into pretentious Science Fiction, this is definitely worth looking up.

I'm not surprised that it took two years to produce this unique binary novel - it's obvious that a lot of thought and work has gone into it just from the superbly atmospheric title sequence, and there are five disk-sides worth of story to plough through!

However, I found Portal very tiresome to read - mainly because it takes far too long to 'turn the pages'. I'm not overly enthralled by the story itself, either. I lost interest towards the end of side one, and by the time I reached the end of side two I was bored with the whole thing.

It's all down to your personal tastes whether you will enjoy this particular type of Science Fiction story or not. But even if you do like the story, you may well find the pace a little too slow for comfort. Full marks for effort, presentation, innovation and execution, Activision - it's a pity that the content doesn't match those qualities.

This is not a computer game, it is a computer novel - and I intend to review it as such. Science Fiction is basically a cinematic art, and only lends itself well to literature in certain forms. For instance an action-packed science western such as 'Return Of The Jedi' would not be a particularly good read, whereas a tense atmospheric space thriller along the lines of 'Alien' can transfer beautifully from screen to printed page.

Portal is certainly closer to the latter - yet for some reason it doesn't work. I'm not sure if this is meant to be interactive - if it is, well that's like saying that changing the pages of a paperback gets you involved in the action!

Portal contains very little atmosphere, moves slowly and builds to an inevitable conclusion with little help (or for that matter, hindrance) from the user. If you are a real enthusiast of the Science Fiction novel it may be worth your while checking this out. Having said that, think of all the Isaac Asimov and Harry Harrison novels you could buy for twenty quid - then make your decision.

Portal is not a game, it is a computer novel. It would be unfair to compare it in any way with the type of program we normally review - thus there are no ratings.

There is no Sizzler or Gold Medal award either, as we felt that Portal didn't reach a high enough standard. The three comments are intended as a guideline.

If you are an enthusiast of the Science Fiction novel, it may be worth your while checking this out.