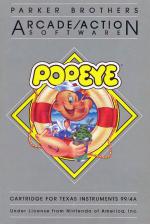 You play the part of Popeye, and the object is to catch all of Olive's hearts, notes and cries for help before they hit the water and sink, while avoiding Brutus - I always thought it was Bluto! - Sea Hags, and vultures.

Popeye has three levels - Sweet Hearts, Love Notes, and H-E-L-P. We'll deal with the standard assetes Popeye can use on each level, the first being spinach. This appears randomly on each screen and, to use its power, place our nautical hero over it and depress the fire button. He can then attack Brutus and knock him overboard.

On level one, there is near the centre of the screen a punch bag and bucket. Should Popeye thump the bag when Brutus is underneath, the bucket falls, stopping Brutus in his tracks and gaining extra points.

On level two, a different scenario is set, in the shape of a house, See-saws, bouncing Sweetpeas and Brutus attack Popeye. At level three, sliding platforms help him move around, while he can punch marauding vultures which swoop down. Incidentally, Brutus has the ability to swing a punch from the floor above to KO Popeye.

The music is excellent, the graphics are the tops, and the game is an authentic copy of the arcade version.

The price might seem a little heavy but, when you calculate how much you drop in the coin slots, it all becomes relative!