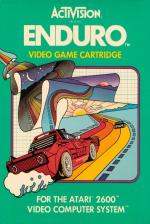 Would-be racing drivers will have plenty of opportunity for sneak armchair practice this autumn, as long as they also have an Atari VCS.

It seems that road-race games are about to hit the home video circuit in a big way.

The official Atari offering is a VCS version of their arcade game Pole Position, due to be launched in cartridge form this September.

You are at the wheel of a powerful racing car and the idea is to overtake as many cars as possibvle in the shortest time.

The main race, however, is open only to those who qualify in the first round which you have to do by completing a circuit in a slightly longer time. This ensures that newcomers to such games are not faced with a seemingly impossible task.

The car has two gears, high and low, which can be selected at any time by pulling the joystick towards you for high and pushing it away for low gear.

Left and right are used to control the car itself while the fire button acts as a brake.

The circuit is well displayed. It takes up almost the entire width of the screen in the foreground and about half that in the background as it goes towards the horizon.

The opposition to Pole Position comes in the form of Enduro from Activision, due to be released in a couple of months.

Another road-race game, this features a 24-hour rally in which you have to pass any many cars as possible in one day.

The time of day and the various stages in the race are represented on screen by some really stunning graphics which are among the best I've seen from a VCS.

The race starts in the morning with a green road and blue horizon. As the day wears on, the colour of the sky changes with a colourful and gradual sunset with various shades of pinks and reds.

Then comes night. The display changes to black and white and only the lights of the cars are visible. In the middle of the night comes the fog. Visibility is halved and driving becomes more difficult.

Quota for the first day is to pass 200 cars and if you succeed the target rises to 300 for subsequent days. If you survive for five days a trophy appears on the screen. Send a photo of this to Activision for free membership of the Roadbusters club.

Enduro wins hands down for graphics. The road is clearer and the game has various screens with different times of day and weather. Pole Position has just one.

I found the Activision car easier to control, except in the snow where steering is deliberately sluggish.

I passed 200 cars quite quickly but 300 in the second screen is far more tricky.

If I wanted a road race game, my personal choice would be Enduro. Quite simply, it has more features and superior graphics.

If I wanted a road race game, my personal choice would be Enduro. Quite simply, it has more features and superior graphics than Pole Position.