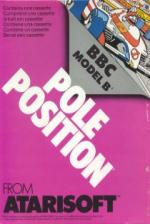 Computer games are very like films. Every now and then a real classic, something really special, comes along which shocks critics into raptures of praise.

The film industry has been plagued for years with remakes and endless sequels to successful movies. Pole Position, too, was acclaimed as a classic computer game - one of Atari's shining successes. Sadly, their version for the BBC has about as much punch as Son of Rocky IV.

When you load the game up on your BBC you are given a frozen view of the racing car and track. Everything looks fine, just like the Atari version. Unfortunately, when the game starts, any resemblance to the Atari version of Pole Position disappears utterly.

The game uses four different keys to control the racing car, the space bar is for changing between low and high gear, the A and S key act as the steering wheel and the Return key as the brake.

As you steer left and right, the view of the road changes, but instead of the smooth animation and movement I'd expected, the sides of the track began to sneak up and the mountain scenery in the background began to flicker.

The game also appears to be really easy to play. There's no real challenge and passing several cars at a time, even on corners, is not a difficult task as the cars very rarely try to change lanes.

The graphics are good, but spoilt by the flickering.

The game comes in the usual high quality packaging you would expect from Atari and includes a chart which allows you to follow the fortunes of your Grand Prix heroes over the season. There is only one small problem - the chart is for last year's season.

Pole Position on the Atari is acclaimed as a true classic computer game. Sadly, their version for the BBC has about as much punch as Son of Rocky IV.