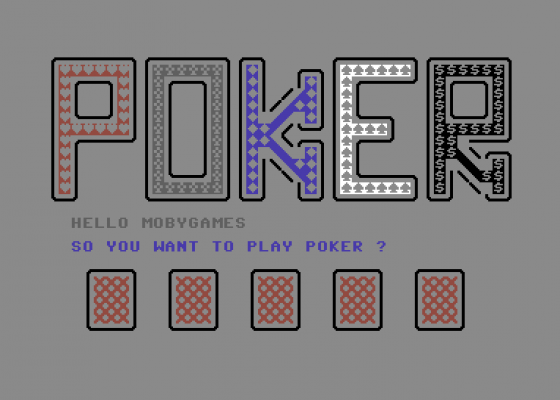 Smoke-filled saloon with six dubious characters looking slyly at each other, and you're all alone in this hostile environment. Life is as cheap as a game of cards and perhaps you'll be shot. There's nobody to help you and nowhere to run to.

That's the atmosphere generated by this program which offers all the features of real-life poker, the game in which you have to try to obtain certain combinations of cards, and then make a bet according to how good you think your hand is.

There are six characters who challenge you and try to take your money. You start with $1000 and unless you're as careful as they are you'll soon find your money disappearing. 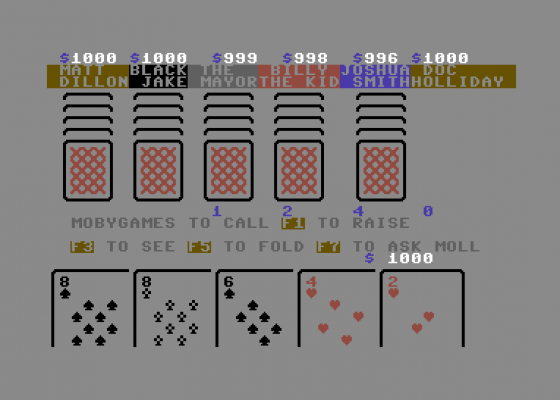 As in real poker, everyone takes turns to deal and five cards are dealt to each player. You can then view your five cards and sort the hand out. Initial bets are made and everyone decides in turn whether to stay in, raise the pot, or throw out their hand.

Once the preliminary round has taken place, the real fun starts. Perhaps you're taking a risk on a low hand, but who else is to know? Bluffing like this works sometimes, but don't try it too often. If you want, and when everyone is ready, you can discard up to three cards to try to improve your hand.

Keep an eye on what the others are doing too. If someone doesn't discard anything, it usually means he's got a pretty good hand. But be warned, some of the computer players also bluff. 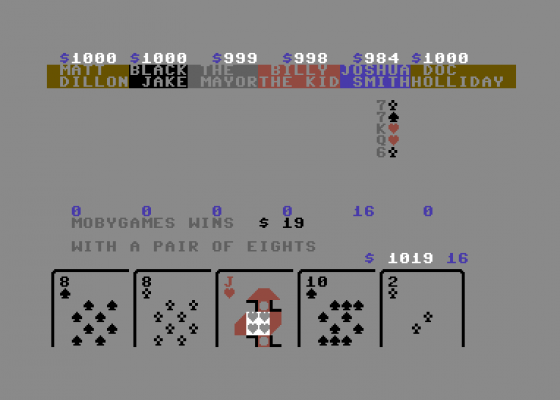 The round continues with each player either passing the stakes (by 8 dollars a time), throwing-in their hand, or asking to see the others' hands (and matching the current stake). This is where you find out who really has guts.

When no one wants to raise any higher, all the hands still in the game are revealed and the highest combination takes the pot.

Although the graphics aren't spectacular, the sound isn't stunning and the whole game is rather slow, it still has plenty of character and provides a great game of cards. If you find yourself bored of zapping, then this is an excellent way to spend a Sunday afternoon. 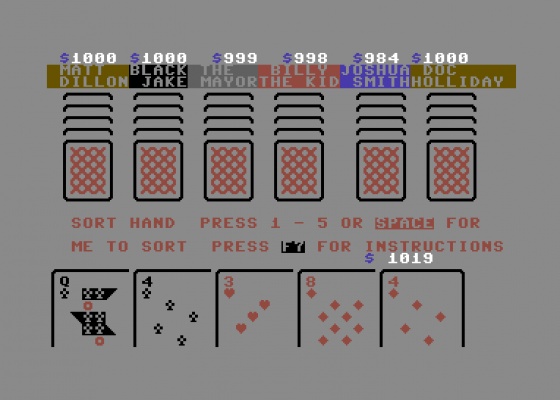 Howdy yawl! I just mosey'd on down ta tell ya what I thought about that there Poker program. Well, one things fer sure, those cowboys play a mean hand of five card stud, and I'm sure ol' Moll is cheatin' and tellin' 'em what I've got. In fact, if things git much worse I'm gonna have ta start playin' Strip Poker cos' it's easier ta beat and the opposition's a mite prettier.

Each person in this game has certain characteristics, which you can discover by carefully watching the comments printed on screen as each makes his move. For example, you'll notice that Doc Holliday winks a lot at Moll the barmaid when he thinks he's got a rotten hand and is trying to bluff his way out.

On the other hand, Matt Dillon is consistently good and does all sorts of things to fool you. 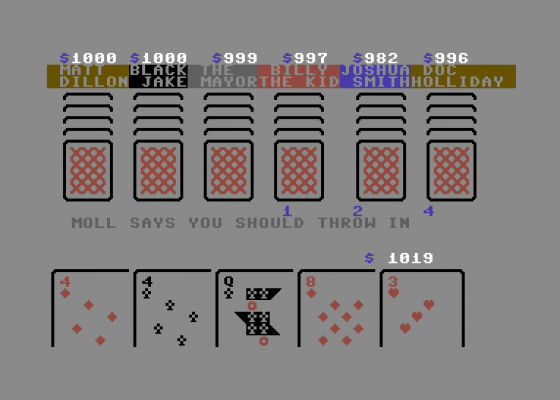 Once you get the swing of the game you can have a really mean game of poker and bust the players of all their money, which is great fun!

Originality 51%
Poker has been done before but not with six opponents.

Graphics 25%
Nice cards but little else.

Lastability 67%
Lots of cash to play with and great if you like cards.

Value For Money 68%
Perfect for those with a reckless gambling streak.

Poker has been done before but not with six opponents. Perfect for those with a reckless gambling streak. 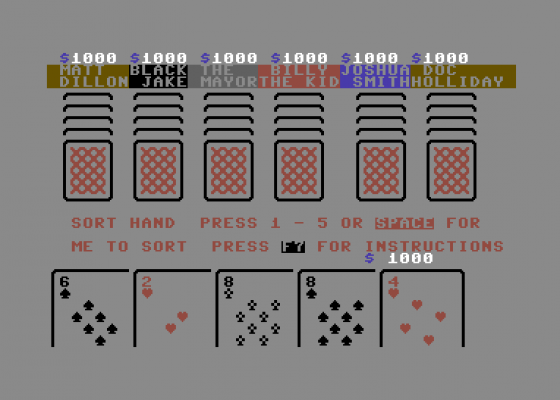