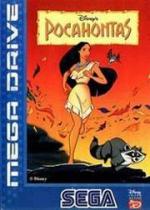 Have you ever wanted to dance barefoot through the forest? Ever wanted to run with the wind, sing beneath the trees, feel the dew between your toes and the sunlight on your face? And have all the animals as your furry little friends?

Well, you'd better go camping then - this is a games magazine and you won't find any articles about miserable outdoor 'leisure' pursuits within these pages. Instead of a night beneath the stars we'd heartily recommend a few nights with Pocahontas.

Sega's latest Megadrive offering puts you in the moccasins of Disney's Native American babe as you wander hrough the frontier lands, preventing a war and rescuing your true love, John Smith. Presumably he'll sort out the beers when you finally save him.

If this all sounds a bit girlish, then you can alternate play between Pocahontas and her raccoon chum Meeko. Which is quite clever. But just as girlish, really.

You're thinking this is one of those Disney games. One of those big-selling, unoriginal platformers... You'd be wrong on that count, as Pocahontas is a pretty unusual game concept. At least attempting to fit in with the film's non-violent theme, it has you running about the forest helping furry friends and trying to prevent the outbreak of war.

This is going to be a non-starter for Megadrive owners raised on a diet of Desert Strike and Mortal Kombat, but anyone interested in a new puzzle experience (not too hard, mine) would be advised to investigate.

Basing a game on big girl's blouse Pocahontas isn't the most promising idea we'd ever heard, but you don't have to collect Barbies and have pigtails to enjoy this.

In fact, this is one of the most unusual Megadrive titles we've come across in quite some time. There's nothing quite like its combination of action and visual puzzles, but there are favourable comparisons with games like Ecco and Kolibri. This won't satisfy your bloodlust, but if you're looking for something more cerebral then Pocahontas has got more to offer than just a great pair of legs.

Throughout the game you'll come across all sorts of animals. Some of them, like the deer with a bramble-bush entangled on its horns, will be in distress. By freeing the deer, you absorb its spirit. Elsewhere you'll race the wolf for a special reward, and so on. Other animals' spirits will give you new abilities and help you swim, jump, climb, etc. The spirits "menu" will tell you which abilities you currently hold and which you've yet to acquire.

Animation 86%
Great movement with plenty of frames of action.

Effects 80%
Some very graceful 'at one with nature' trickery.

Playability 87%
A challenging but rewarding play featuring a variety of game styles.