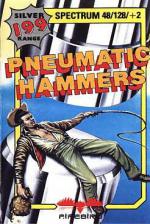 In the world of international troubleshooting, improvisation is the key. The American oil-rig disaster expert Red Adair once stopped a major blowout with his secretary's hairpin! They don't make them like that anymore.

But in Pneumatic Hammers YOU are the troubleshooter...

At the bottom of the Lee Valley a gold-research base is threatened by constant landslides caused by its overactive pile-drivers. The handle that operates these hammers has sheered off, rendering the machine uncontrollable.

Having evacuated the base the operators get in touch with you, Red O'Blair, troubleshooter supreme. Your job is to shut down the plant by replacing the missing lever, before the pile-drivers bury the base and cause catastrophic damage to the nearby towns.

The research base consists of five rooms connected by a lift. The building is in the middle of a river running through a canyon; piles are driven into the riverbed on either side, and rubble from the landslides slopes upward from the river's edge.

The only way to get another handle for the wild hammers is to cast one from the most abundant metal in the area, gold, unearthed by the landslides.

To get to the mineral-rich rubble you hop across the river, using the piles as stepping stones.

When enough gold has been collected you can leg it back to base and test the gold for purity. Then it's off to the furnace to melt it down and cast a new handle.

The game ends if the rubble level outside gets too high, crushing the base-and you with it.

'Pneumatic Hammers is one heavy-going game. What little there is to do is repetitive and boring, and the graphics do little to enhance the game - none of them are very convincing and all are crudely drawn.'

What a weird little game! Pneumatic Hammers is the most uninteresting, unplayable game I've seen lately. The graphics would have been passable three years ago, but by today's standards they're pathetic.'

'Pneumatic Hammers is well original - but it's a failure. The gameplay is very limited, with only one major task, and gets monotonous and infuriating. The graphics are bad, the screen display looks amateurish, and there are some nasty attribute problems and badly-animated characters.'

The graphics are bad, the screen display looks amateurish, and there are some nasty attribute problems and badly-animated characters.