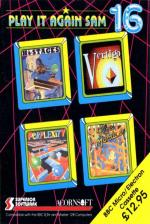 Picture the scene. It's Christmas Day, lunch is over, you've pulled the last cracker and three turkey wish-bones (the result of too much brandy on the Christmas pudding or modern genetic engineering!). You are slumped in your favourite chair with a battered paper hat on your head. You can now look forward to an afternoon of watching films that you saw on video two years ago, or (if you wrote that note to Santa) you can sample the delights of Play It Again Sam 16 from Superior/Acornsoft!! And 'sample' is all you will be able to do in one afternoon - there are no short measures and no padding in this compilation.

As announced in EUG #1, SAM 16 features a new game called Vertigo. Games like it, with titles such as Gyroscope and Spindizzy have been available for other 8-bit machines in the past, but this is a much improved version. There are fifty screens to tackle for a start!

The object of the game is to guide the 'Perfect Octahedron' (or 'Bouncy Ball' to you and me) around the screen, collecting diamonds and other valuables. The playing area, which is viewed in isometric 3D, consists of a series of blocks which form pathways, ramps and steps etc. Your task is to keep your Bouncy Ball playing piece on the straight and narrow. As you are playing against the clock, it is vital that you choose the quickest route around each screen and to avoid any Black Demon balls which may be roaming about.

You are awarded a fixed number of points for each screen you complete (which increases with each level) plus a 'time' bonus. It is also possible to gain extra lives up to a maximum of five.

As with all the best games these days there is a password system, which means that once you have completed a screen there is no need to start from the beginning if you lose all your lives.

I must say that before I attempted to play the game seriously, I spent some time admiring the graphics. The laws of gravity and inertia are faithfully reproduced on screen, so when for example you need to gain momentum in order to negotiate a ramp, you must use just the right amount of 'force' to clear it and not go sailing off the playing area (fatal!). This may sound daunting but even I got the hang of it after a few minutes!

Another novel feature is the way your playing piece sometimes disappears from view as it does 'behind' parts of the playing area and has to be guided blind. You are not left completely in the dark though; a small dot indicates its position at all times (you'll have to play the game to see what I mean!).

This is a game that requires ever increasing skill and planning as you progress through the levels and it should keep even a Master Gamer like Ray Lennard busy for quite some time! (Now there's a challenge!)

One of Ray Lennard's past conquests was Perplexity which is also included in this compilation. Ray was one of the first three people to complete this game and divulged the passwords in EUG #1. Knowing the passwords can only help you to practice on any one of the 16 levels of this game; you have to complete it without using them in order to read the final on-screen message!

Next up we have Hostages in which you can become a crack member of the SAS in the comfort of your own home. The game consists of three increasingly difficult 'missions'; each of which has three levels. In order to complete the last 'ultimate mission', you will need to have become an expert in concealing snipers, entering a building through the windows, abseiling and searching for hostages without being shot by terrorists.

This is not a game for lily-livered wimps - that's why I resigned my commission and moved on to play Pipemania.

The idea in Pipemania is simple. A grid is drawn on screen with a 'starting piece' in position. You have to score as many points as possible by constructing a pipeline beginning at this point.

Sections of pipe appear at random on the left of the screen which you can place anywhere on the grid. After a time a strange liquid called 'flooz' begins to flow through the conduit you have built. If the flooz runs through the required length of pipe (indicated at the top of the screen) you may advance to the next level. If not you lose a life!

As you encounter higher levels, the gameplay becomes faster with more specialised sections of pipe like Reservoir, Bonus and Obstacle Pieces becoming available, so you'll need to keep your wits about you.

All in all, Play It Again Sam 16 is a brilliant compilation without a dud in sight. It's an ideal Xmas gift to give or receive - and beats 'The Sound Of Music' hands down!!

Play It Again Sam 16 is a brilliant compilation without a dud in sight.
Logout