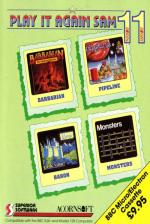 Play It Again Sam 11 consists of the traditional fighting game, Barbarian followed by Pipeline, a hit with a lot of people during its original release, the old Acornsoft hit Monsters and finally a new release Baron.

To start with, for those who have never seen or played Barbarian, the idea of the game, is to fight with Drax's ten swordsmen, all of them having differing abilities over each other. After bringing your trusty sword down on the head of the tenth swordsman, you must prepare to do battle with Drax himself.

The game is split into two different sections. The first being the practice level which, as before, is fought with ten enemies in order to gain the maximum skill for the second section - Fight to The Death.

Your screen is a rectangular box where you and your opponent can be found preparing for battle. The scenery is of two types, the first being a woodland and the second a night scene. As you move towards your opponent or vice versa, depending on what your enemy feels like! You strike out at him. As with all fighting games, there are a lot of movements available, including jump, crouch, roll and web of death, amongst at least eleven other moves.

The one move that I particularly liked was the Flying Neck Chop, where you spin round and cut off the opponent's head, leaving just a headless corpse and a spare head! At this point a small creature comes from the left of the screen, puts the weight of his foot under the head and boots it off the opposite side of the screen, and promptly continues walking whilst pulling your opponent's body, or whoever's, off the screen.

The Fight to the Death section, is played in a scene where I presume Drax is seated behind the two opponents, watching you and your foe battle it out. The little monster, described before, is also contained in this section of the game. I didn't really find this game very addictive and just straight forward, but the sound of the cutting blows sounded quite realistic.

The second of the four games is Pipeline, a sort of arcade adventure, but with the clever feature of having many pipes which you can travel down in order to reach a destination.

You move around this strange world of large imposing pipelines looking for various objects, which can be matched up with the enclosed instruction leaflet. Like all good adventures, puzzles come in all shapes and sizes, examples of these consist of Jovian Wine?, a Laser Gun, Fire Blanket and a Mallet amongst many others!

Movement is made in any of the N, S, E and W directions, via the usual Z, X, * and ? keys. To help you along your hazardous journey, you are given a map and a backpack.

The game itself is very smooth and the graphics are quite nice. The only thing that I didn't like about the game was that with all those pipelines, there is no telling where you will emerge, meaning that there is a certain element of luck involved if you come out where you want to!

Also included on this Sam, is a Pipeline designer which enables you to design custom-made Pipeline games. You can even determine the characteristics of each puzzle and also design characters and of course, design levels. The inclusion of the designer in this compilation, makes it a very worthwhile investment.

Baron is the next title on this compilation - a new title from the previously unknown programmer, Angelo Sparacino. The object of the game is to locate four objects which are owned by the Wizard, transport them to his cell and you can rescue him.

I didn't like the game because of its slowness. It took a long time to move between rooms and to locate objects. All told there are some 133 screens and 49 objects which, as with other games on this compilation, must be used in the correct way in order to complete different puzzles.

I covered around fifty screens and solved quite a few puzzles. Screens can be mapped using the room co-ordinates which are shown at the top of the screen. Some help is given in the instructions, but after a while you are left to go it alone. Shooting at various creatures is also allowed which helps in your difficult task. To sum up Baron - for a BBC game, it is far too slow!

Finally Monsters makes a welcome appearance. This is a very dated game now, but is furiously addictive. If you have never seen it before, the idea of the game is that you must kill all the monsters on the screen, by first digging a hole on one of the levels, letting the monster drop into your hole, and finally filling it up again.

Basically this game is a ladders style game and consists of a bar at the bottom of the screen, which represents the amount of oxygen left, i.e. the time remaining before you die! If you let a monster fall into a hole without filling it, it will come back out of the hole as a more difficult-to-kill monster, which can only be killed by dropping it through two holes.

I rather liked the squealing noise of your man when one of the monsters gets him and also when you only have one monster left to kill, how you can run about at great speed, trying to escape his deadly grips.

As this game is so old, there isn't particularly a lot say that hasn't already been said, apart from the fact that simple games seem to be the biggest hits. Play It Again Sam 11 has all the hallmarks of being a puzzling and varied compilation. If Superior can produce compilations of this callibre, then long live Sam!

Play It Again Sam 11 has all the hallmarks of being a puzzling and varied compilation.
Logout