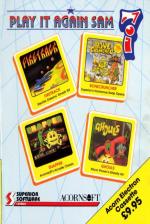 Another trip to the vaults for the Hanson lads with a rather mixed bag this time - two Superior games, two others.

Superior stuff first. The nod to the recent back catalogue for this compilation is Bonecruncher, the sub-Repton clone that, surprisingly perhaps, never really seemed to take off as a game. Sure, lots of people bought it but I was never inundated with letters and tips for the game - a usual sure sign of a winner here in the office.

The plot (if it's new to you) is simple - lots of levels in which you must collect skeletons, melt them down into soap and deliver them for the monsters' bath time, assuming you've found the key to the exit.

Ah, if only it was that simple! There are various nasties to avoid or kill and some very unpleasant balloon-like objects which move en masse across the screen, blocking your game plan. However, as the wind shifts so do they and some neat planning is in order. In the midst of this chaos, you have a dumb but useful assistant who can help to clear areas, block balloons and do other such selfless things.

Loads of fun, loads of soap - definitely one for the collection if you don't have it already. Which, sadly, is more than can be said for the other Superior game - a real "classic", Snapper.

I suppose this was inevitable, given the excitement caused Grandslam's new 3D Pac-mania and it does give newish owners a chance to see what passed for state of the art gameplay more years ago than we can recall. A competent conversion of the arcade classic Pacman, like all the other early Superior conversions, this is fun to play but will hardly keep you enthralled for ever. I can't believe you've never played a version of this - eat the pills, avoid the ghosts, race round the maze, etc - and so we'll pass swiftly on to the compilation's sure fire classic.

Regular readers will know my admiration of ace coder Orlando, author of such classics as Frak and Zalaga. Well here is his best work ever - the smooth scrolling, fast action, graphically detailed, mega compulsive, shoot-'em-up Firetrack and, for the first time, an Elk version.

Sadly, it had poor distribution on initial release from Electric Dreams - people were crying out for it but not enough copies were made - and it's easy to see why. This was Orlando's successful attempt at showing just what the Beeb was capable of, and it's a natural for an Arc or 16-bit conversion. Even if you don't like shoot-'em-ups, this is, in my humble opinion, one of the three best games ever released for the Beeb (for the record the others are Elite and Citadel). If you don't have a copy, buy this compilation now and be amazed.

Rounding out the package is an old Micro Power (or was it Program Power, I never could work it out?!) classic Ghouls. Looking very dated now, this is a ladder and platforms game that spawned a thousand limitations, all equally basic in style but compulsive to play. If you've got the other games on this compilation, then don't buy it just for this - disappointment lies that way.

So, the conclusion? Two great games, two old stagers - not a bad selection, lads. What's next? And when, oh when, are we going to see BMX On The Moon on one of these? That could really embarrass some people.

Future plans for the series include the aforementioned Zalaga, some more recent Superior gems like Spycat, Barbarian and Quest but probably no more from the old Superior days. As Steve Hanson points out: "We have the pick of the best games from all sorts of software houses - why spoil that?" Why indeed.

Oh yes, one more we might see in this form is the "still under development" Quest 2.

Of greatest interest here is the new Electron version of Firetrack, a first. I found this half exciting, half disappointing - exciting because it does manage to capture a great deal of the excellence of the game in its graphics, disappointing because it falls short. Hardly surprising, given that Orlando used virtually every byte in the Beeb to create the game. Still the Elk conversion by Chris Terran is more than workmanlike and if the game design and attack patterns are different, then it still has to be the best shoot-'em-up for the Elk market.

The other games? No problems, but nothing to get really excited about. Score it as a seven out of ten.